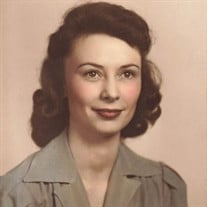 Lena Bob (Merritt) McDonald was born to R.L. And Lena Merritt (who preceded her in death) June 25, 1917 on a ranch close to Plains, Texas. She left this world to be with our Lord, February 27, 2021. She was 103. Known to her friends as Bobbie and family as Bob. Bob lived a full and impressive life. A strong and independent woman, raised on a ranch east of Lake Arthur, New Mexico. Her adult life journey began in Abilene, Texas where she attended Draughan Business college. She met her husband Neal McDonald who was staying at the same boarding house while Neal attended Abilene Christian College. She cared for Him after he became paralyzed following an accident. (He precedes her in death) Bob filled her days with Art. Painting, sculpting, furniture design, creating from uncommon mediums. She was featured in many local newspapers and magazines. She was a beautiful seamstress as well. She created many of her own clothes from fabric purchased at Martha’s Fabric her sister’s Martha Elizabeth (Lib) Derrick’s store. (Lib precedes her in death) She and Neal resided in San Angelo, Texas and were members of Colorado & Jackson Church of Christ. Summers in San Angelo were spent with visits from nieces and nephews. A favorite activity was to swim at the Town House Hotel. One trip resulted in her jumping in dressed in full business attire fishing Nephew Louis & niece Clarissa out of the deep end when they jumped in and couldn’t swim. Lots of Dr. Pepper and Cherry Mash candy had by all!!! Bob traveled the world after Neal’s death and retired in Ruidoso, New Mexico. She loved to entertain church groups and was very active in senior groups. Winning multiple pool tournaments! Many hours were spent playing cards with nieces, nephews and grand nieces and nephews. She didn’t lose often! As we have grown up we realize how extraordinarily talented Bob was. She was a Pistol, a fierce right fighter, strong willed and brave. She fully intended to live until 110. She was close! She loved her brothers Chris Merritt (he precedes her in death) and Billy Merritt. Bob loved her family and helped them in many ways through the years. Bob was a taste maker and lived life with great flair. She loved and served God and never failed to tell you she loved you and was praying for you. We hold our memories close and we will miss her.... She is survived by Billy and Angie Merritt. Nieces and Nephews, Robert, Becky, Dinah, Rachel, Clarissa, Cassandra, Russell, Louis, Tammy and Jenny. Numerous great and great, great nieces and nephews. Special friends, Joe and Nelda Hayhurst And caretaker Gabby Urias. Memorial service to follow at a later date. Please take a moment to share a kind thought or memory with Lena’s family at www.andersonbethany.com. Lena’s tribute was written in her honor by her family.

Lena Bob (Merritt) McDonald was born to R.L. And Lena Merritt (who preceded her in death) June 25, 1917 on a ranch close to Plains, Texas. She left this world to be with our Lord, February 27, 2021. She was 103. Known to her friends as Bobbie... View Obituary & Service Information

The family of Lena Bob (Merritt) McDonald created this Life Tributes page to make it easy to share your memories.