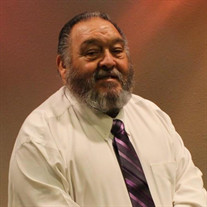 On August 19, 2021, Leroy left his earthly home to take up residency in Heaven. Please take a moment and share a kind thought or memory with Leroy’s family at www.andersonbethany.com. He was born on April 22, 1951, to Clovis and Luticia Archuleta in Roswell, NM. Leroy lived all his life in Roswell. Being a native of Roswell for 70 years, he befriended many people. After 23 years of working at TMC/ Nova Bus, Leroy was one of the last to leave the plant as it closed. He worked ILEA driving the bus for foreign police officers that came to train. Leroy’s final place of employment and most fulfilling place to work was at Anderson Bethany Funeral Home. Here, he found his calling. Knowing so many people, he never met a stranger. He was so caring and compassionate with the families that lost their loved ones. Leroy felt their pain because he himself had known that pain when he lost his beloved son, Levi. Leroy’s health began to fail, and he retired. He fought long and hard, but he was tired, and GOD was ready for him. Leroy was a die-hard Steelers fan, he never wavered. There were times he would get together with friends to watch a Steelers game, the only Steelers fan in the bunch. When his Steelers won, it was unmerciful. Leroy is survived by his wife, Cindy of the family home; son, L.A.; sisters: Toni Rodriguez, Maria Archuleta; two brothers: Danny Archuleta and Frank Archuleta; brother and sister-in-law, O’Dean and Sheila Ray, Mike and Myra Ray; numerous niece’s and nephews that he dearly loved; as well as his constant companion, Dottie his “Chihuahua.” Leroy was preceded in death by his son, Levi; parents: Clovis and Luticia Archuleta; and siblings: Jenney, Romona, Rosie, Anna, Louie, Micheal, Richard, Clovis, and Paul. In lieu of flowers, please donate to the Roswell Humane Society. We want to thank all of the staff at Frontier Medical, Dr. Feroze, Dr. Chechani, Dawn Wulf, for all they did for Leroy. Leroy’s tribute was written in his honor by his loving family.

On August 19, 2021, Leroy left his earthly home to take up residency in Heaven. Please take a moment and share a kind thought or memory with Leroy&#8217;s family at www.andersonbethany.com. He was born on April 22, 1951, to Clovis and Luticia... View Obituary & Service Information

The family of Leroy Archuleta created this Life Tributes page to make it easy to share your memories.

Send flowers to the Archuleta family.