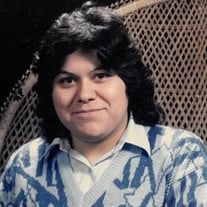 Loretta M. Garcia, 66, was called home to be with our Lord on Tuesday, May 21, 2021. Please take a moment and share a fond memory or kind expression of sympathy for Loretta’s family at www.andersonbethany.com. On April 1, 1955, Loretta was born to Miguel (Mike) Mora and Arcelia Martinez Garcia Sr. (now deceased). She graduated from Roswell High school in 1977 and loved her Roswell Coyotes. Loretta especially enjoyed attending the rival football games against the Goddard Rockets. she was also proud to have attended East Grand Plains Elementary School. Loretta loved being a teacher. Nothing made her more proud as to her students succeeding and accomplishing their dreams, as many of her students did after graduating high school. They would come back years later to let her know what they had achieved. Loretta became one who taught English as a second language along with also being a Teachers Aide at East Grand Plains Elementary School from 1977-1988. She was an avid member of the National Education Association. Loretta received several Youth and Fitness Awards from the Health and Physical Education and Recreational Department of the National Educational Association. She retired early from the Roswell Independent Schools in 1989 -1990 and continued volunteering for the Roswell Head Start Programs for her nephews and nieces. Loretta volunteered and worked alongside her brother, Robert M. Garcia, who was also a teacher. Whom also proceeded her in death. Loretta loved spending time outdoors and maintaining the yard. Her most exciting and greatest passion was decorating for birthday parties and all holidays. She loved to have get-togethers and be around her family. No matter what you instigated and talked Loretta into doing, she made it happen. She made it fun and it was never boring with her in the mix. Balloon fights, water cannons, volleyball games, board games, just playing and laughing with the kids and making memories with everyone around was who Loretta was. She was the best aunt, great aunt, godmother and sister anyone could’ve asked for. We were truly blessed to have her in all of our lives. If any one of us wanted fresh tortillas, green or red chile and refried beans or fried potatoes with onions at midnight, you got-em. Loretta was there if anyone ever needed anything. She was always there to help in any way she could. Those left behind are Loretta’s sisters: Beatrice Burns and Teresa G. and Husband Greg H. Pacheco Sr; brothers: Louis Garcia and wife Teri of San Antonio Texas and Mike Garcia and wife Christine, Thomas F. Garcia and wife Jimmie Lou, Danny Garcia and wife Tamela all of Roswell; godchildren: Matthew Paul Pacheco and Rebecca Estella Sanchez preceded her in death and Victoria Pacheco Jurado; and numerous nephews, nieces and great-nephews and great-nieces. Loretta is preceded in death by her parents: Miguel (Mike) M. and Arcelia M. Garcia Sr; brother, Robert M. Garcia; sisters: Patricia G. Gonza1es and Dolores G. Sanchez; and goddaughter, Rebecca E. Sanchez. Loretta will be forever missed but never forgotten. Until we meet again, Sis. We love you. You and Rose always did everything together. Graveside service will be held at South Park Cemetery on Wednesday, July 21, 2021, at 10:00 AM. Loretta’s tribute was written in her honor by her family.

Loretta M. Garcia, 66, was called home to be with our Lord on Tuesday, May 21, 2021. Please take a moment and share a fond memory or kind expression of sympathy for Loretta&#8217;s family at www.andersonbethany.com. On April 1, 1955, Loretta... View Obituary & Service Information

The family of Loretta Martinez Garcia created this Life Tributes page to make it easy to share your memories.