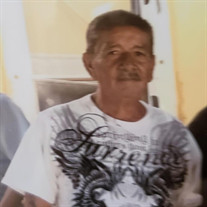 Manuel Artiaga, Jr, 66, of Roswell, NM, passed away on Saturday, September 4, 2021. Please take a moment and share a kind thought or memory with the Artiaga family at www.andersonbethan.com. There will be a graveside service at South Park Cemetery in the General Douglas L. McBride Veterans Cemetery area, where he will be placed in the columbarium on Saturday, September 25, 2021, at 10:00 AM. On January 11, 1955, Manuel was born to Manuel and Mary Artiaga, who have preceded him in death. He graduated high school and enlisted in the United States Army, and then he joined the United States Navy. While Manuel served his country, he received many medals of accomplishments and was later honorably discharged. He was a very proud veteran who flew his flags proudly every day. Manuel had been married a few times and remained close to all his extended families. Though he never had any children of his own, he raised many and was a proud “grandpa.” Manuel was a diehard Dallas Cowboys fan and would paint anything and everything white, silver, and blue. Manuel had a lot of skills and many jobs. He will be missed by his family and friends. Those left to cherish his memory are his brothers: Joe and Sophia Artiaga, James Artiaga, Ricky, and Tiffany Artiaga and Eddie Artiaga; sisters: Mary and Dennis Moore and Carol and Robert Sanchez. Many nieces and nephews also survive him. Manuel is preceded in death by his parents: Manuel and Mary Artiaga; sister, Irene Barela; and his sister-in-law, Liz Artiaga. His family wishes to extend sincere thanks to UNM and the VA hospital in Albuquerque and Hospice for their special care and for keeping him comfortable. Manuel’s tribute was written in his honor by his family. I fear no foe with thee at hand to bless; I’ll have no weight and tears, no bitterness; Where is death’s sting? Where, grave, thy victory? I triumph still, if thou abide with me, Hold thou thy cross before my closing eyes; Shine through the gloom and point me to the skies. Heaven’s morning breaks, and Earth’s vain shadows flee; In life, in death, O lord, abide with me!

Manuel Artiaga, Jr, 66, of Roswell, NM, passed away on Saturday, September 4, 2021. Please take a moment and share a kind thought or memory with the Artiaga family at www.andersonbethan.com. There will be a graveside service at South Park... View Obituary & Service Information

The family of Manuel Bihl Artiaga Jr. created this Life Tributes page to make it easy to share your memories.

Send flowers to the Artiaga family.