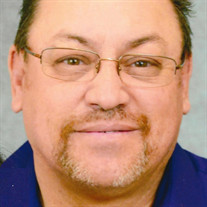 Manuel M. Ramirez Sr., 60, went to be with his Lord and Savior on Monday, April 4, 2022. There will be a viewing at Anderson-Bethany Funeral Home, 2609 S. Main, St. Roswell, Monday, April 11, 2022, from 12:00 PM – 6:00 PM, followed by a Rosary at 6:00 PM. Mass will be held at St. Peter’s Church 111 E. Deming St., Roswell, NM 88203) Tuesday, April 12, 2022, at 10:00 AM. On September 5, 1961, Manuel was born to Fidencio & Lupe Ramirez in Artesia, NM, the second oldest of 8 siblings. He graduated from Dexter High School in 1980 and served in the United States National Guard. Manuel married Terry Ortiz on July 17, 1982, in Roswell, NM; she survives him at the family home. They had three children Angela, Manuel, & Miguel. At the time of Manuel’s death, he was employed with the New Mexico Department of Transportation for 16 years as a mechanic. His greatest joy in life was coaching his kids in Baseball at Lions Hondo Little League, Football at Roswell Youth Football League, Basketball at the Yucca Center, and Softball with the 9 Wild Roses at the Roswell Girls Softball Association. Manuel was a man of strong faith who enjoyed gardening, hunting, and fishing and loved to tell family stories. He was also a lifelong diehard Dallas Cowboy fan. Later in life, Manuel was heavily involved in his grandkid’s events and activities and loved watching them grow up. There was nothing Manuel was prouder of and loved more than the family he built with his wife; They will continue to build on his legacy and honor him. In addition to his wife, Terry, Manuel is survived by his mother, Lupe Molina; children: Angela Rosenkranz (Ashley), Manuel Ramirez Jr. (Ashley), and Miguel Ramirez (Sara); seven grandchildren: Mariah, Arianna, Sophia, Jaden, Deven, Rhiannen and Elle; Siblings Lupita Everett, Nena (Richard) Regalado, Fidencio Jr (Irma) Ramirez, David (Soco) Ramirez, Javier Ramirez and Isela (Adam) Barela; three sisters-in-law: Cindy (Alvin) Dominguez, Margaret Ortiz and Sylvia Garcia; brother-in-law, Joe (Sandra) Ortiz; and numerous nephews and nieces. Manuel was preceded in death by his father, Fidencio Ramirez Sr.; father and mother-in-law Melchor and Delia Ortiz; uncle, Alejandro (Honi) Medrano; sister, Mary Ramirez; grandson Isaiah; nephews Leonard, Fernando, and Lucas; grandparents Higinio and Serapia Medrano and Manuel and Cruz Ramirez as well as several aunts and uncles. Those honored to serve as Pallbearers are his sons: Manuel and Miguel; brothers: Fidencio Jr., David, and Javier; and his best friend, Audie Wyche. Blessed to serve as Honorary Pallbearers are his grandbabies and all his nephews and nieces. Please take a moment and share a kind thought or memory with Manuel’s family at www.andersonbethany.com Manuel’s tribute was written in his honor by his family.

The family of Manuel M. Ramirez Sr. created this Life Tributes page to make it easy to share your memories.

Send flowers to the Ramirez family.