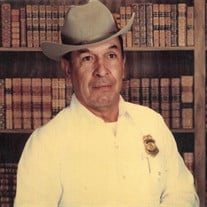 Manuel M Trujillo passed away on Friday, December 31, 2021, surrounded by his family. Please take a moment and share a memory or kind thought with Manuel’s family at www.andersonbethany.com. There will be a Viewing at Anderson Bethany Funeral Home for Manuel on Thursday, January 6, 2022, at 8:30 AM, followed by a Rosary at 9:30 AM and a Funeral Service at 10:00 AM. Interment will follow at General Douglas L. McBride Veterans Cemetery. The family will not have a celebration after the services due to the COVID pandemic. On January 6, 1927, Manuel was born in Guadalupe, New Mexico, to Frutoso and Juana Mendez. He proudly served his country in the United States Navy aboard the USS Bell DD587. Manuel was awarded the Victory Medal in World War II and continued to serve in the United States National Guard in Ft. Sumner, New Mexico. He will be missed by his loved ones and all that knew him. Preceding Manuel in death are his sons: Jesse Trujillo and Andrew Trujillo; daughter, Carron Trujillo; stepson, Henry Portio; parents: Frutoso and Juanita Trujillo; brothers: Orlando and Henry Trujillo; sister, Josie Merryfield; and the mothers of his children: Annie C. Trujillo and Wanda P. Trujillo. Manuel is survived by his children: Manuel Jr. “Sonny” and wife Frances Trujillo, Ruben and wife Esther Trujillo, Larry Trujillo, Joe Trujillo, Manuel P. Trujillo, Elizabeth and husband Paul Weikel, Sharon Kirby, Lydia and husband Andrew Ortega, Suzie and husband Tommy Bleeker, Terri and husband Gary Lehrman, Connie and husband Jesus Baca, Janet Wood, and Ida Trujillo; stepchildren: Joe Portio, Judy Portio, and Nancy Vale; numerous grandchildren and great-grandchildren; brother, Fred Trujillo; as well as his significant other of over fifteen years, Carmen Davis. Manuel’s tribute was written in his honor by his family.

Manuel M Trujillo passed away on Friday, December 31, 2021, surrounded by his family. Please take a moment and share a memory or kind thought with Manuel&#8217;s family at www.andersonbethany.com. There will be a Viewing at Anderson Bethany... View Obituary & Service Information

The family of Manuel M. Trujillo created this Life Tributes page to make it easy to share your memories.

Send flowers to the Trujillo family.