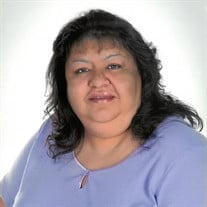 Margaret Ann Rodriguez passed away Saturday, May 1, 2021, surrounded by her children, family, and friends. Please take a moment and share a kind thought or memory with Margaret’s family at www.andersonbethany.com. On March 10, 1956, Margaret was born in Roswell, New Mexico, to Victor R. Pena and Orlidia Pena. Margaret grew up in Dexter, NM, where she attended K-12. After graduation, Margaret married her husband and had four children. She would later divorce and, with the help of her parents and her sister, Gloria, would continue to raise them to be successful kids. She decided to attend Eastern New Mexico University-Roswell and became a Licensed Practical Nurse. Throughout her professional career, she worked at various places in Roswell. She worked at the old St. Mary’s Hospital and Casa Maria, to name a few. She truly excelled in her medical career once she began working at Eastern New Mexico Medical Center. They placed her on the OB floor, where she helped take care of many new mothers after their delivery. She would find her calling working on this floor. She worked and gained so much experience that she eventually began to train many new nurses coming out of nursing school. She even taught a thing or two to the doctors she worked with. She worked at Eastern for 18 years and then moved her career by starting a new job at Lovelace Regional Hospital. Her strong work ethic and love her job earned her employee of the month just a short time later. She eventually retired from Lovelace and enjoyed spending time with her grandchildren. She had a deep love for her children, grandchildren, and their friends. She would make family out of many of her children’s or grandchildren’s friends. She was known to her grandchildren and their friends as “Nana.” Margaret is preceded in death by her parents, Victor R. and Orlidia Pena; and her grand puppies: Cloud Rodriguez and Shelby Lou Gonzalez Rodriguez. Those left to cherish Margaret’s memory are her sister Gloria Pena of Roswell, NM; brother, Albert David Pena of Roswell, NM and his son Gabriel Nathaniel Pena and daughter Alexis Katalina Pena; son, Hector Rodriguez, Jr. his wife Cecilia Rodriguez of Belen, NM, and their children Sergio Lorenzo Gonzales and wife Tierra Rene Baca and their children Genesis Novalee Gonzalez, Vincent Manuel Luciano Gonzalez, and Yessenia Cleofus Gonzalez. Hector’s daughter Emily Loraine Gomez. daughter, Angel Chavez of Roswell and her son Victor Alexander Rodriguez; his daughter Sharia Rose Rodriguez; her son Dimitri Gabriel Rodriguez; daughter Kassandra Gloria Chavez. daughter, Rebecca Nora Rodriguez; son Elias Jonathan Rodriguez. grandsons Elijah Stephenson and Isaiah Stephenson. Son Jacob Jorge Rodriguez his wife Dr. Angelica Maria Rodriguez; their four fur babies, Aiayana, Lily, Mirasol, and Delilah. Margaret is also survived by her two best friends, Sherrie Towler and Reynalda Montoya. Pallbearers will be Elias Rodriguez, Victor Rodriguez, Dimitri Rodriguez, Gabriel Pena, Sergio Lorenzo Gonzalez, and Alex Uranga. A viewing will be held at Anderson Bethan Funeral home Thursday, May 6, 2021, and Friday, May 7, 2021, from 8:00 AM to 8:00 PM. A Celebration of Life will occur Saturday, May 8, 2021, at 9:00 AM at Bethel Baptist Church. Interment will follow after the service. Margaret’s tribute has was written in her honor by her family.

Margaret Ann Rodriguez passed away Saturday, May 1, 2021, surrounded by her children, family, and friends. Please take a moment and share a kind thought or memory with Margaret&#8217;s family at www.andersonbethany.com. On March 10, 1956, Margaret... View Obituary & Service Information

The family of Margaret Rodriguez created this Life Tributes page to make it easy to share your memories.

Send flowers to the Rodriguez family.