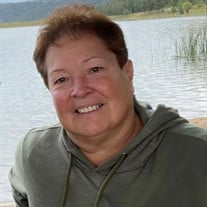 Margarita (Maggie) Luna Herrera passed away on March 4, 2022, in Roswell, NM. A viewing will be held Wednesday March 9, 2022, from 11:00am to 06:00pm, with a rosary to start at 06:00pm which will both be held at Anderson Bethany. A mass will be held at Our Lady of Grace on March 10, 2022, at 10:00am in Artesia, NM. On September 3, 1965, Maggie was born to Francisco B. Luna and Maria G. Luna in Artesia, NM. She attended Lake Arthur High School where she graduated in 1983. She met her spouse Juan Herrera in May of 1993, and they wed on April 27, 2001, in Roswell, NM. She loved her family greatly, especially her two kids and granddaughter. She was a hard-working woman who loved landscaping and to her it never felt like a job. Maggie loved riding her tractor, planting rose bushes, and drinking an ice-cold beer after a long hard day of work. She made many friends over her years of service and loved her customers dearly. She had a love for cooking, especially her red chile whether it was for enchiladas or asado, which will be missed by many. We would love to think she is in heaven dancing with her dad drinking an ice, cold beer and a shot of Jose Cuervo, and together they are watching down upon us taking care of us. Survivors include her husband Juan Herrera, son Jacob Herrera, daughter Araceli Herrera, and granddaughter Arely Herrera. Her brothers Frank G. Luna, Johnny Luna and wife Deanne. Her sisters Dora Gonzales and husband David, Elvira Portillo and husband Ernesto, Elva Hinojos and husband Rudy, and Mary Jane Luna. As well as Emilio “El Mehoe” Amaya, wife Chabely and daughter Mia, niece Terry Navarrette, her god children Valeria, Victor, and Valentina Portillo, and numerous nieces and nephews. She is preceded in death by her mother Maria, father Francisco, and brothers David and Martin Luna. Honored to serve as Pallbearers are Emilio Amaya, Daniel Luna, Johnny Luna, John Mark Stiles, Victor Portillo, Richard Hinojos, Xavier Luna, and Abelardo Melendez. Honorary pallbearer will be Randy Hinojos. The family of Maggie would like to extend a sincere thank you to Elva and all nurses and doctors who cared for her in her final days. Maggie’s tribute was written in her honor by her family.

The family of Margarita Herrera created this Life Tributes page to make it easy to share your memories.

Send flowers to the Herrera family.