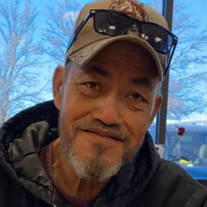 It is with great sadness that the family of Martin Serrato announces the passing; Martin Gerardo Serrato, 56, died August 17, 2021, in his Roswell, NM home. Please take a moment and share a kind thought or memory with Martin’s family at www.andersonbethany.com. Martin was born on February 26, 1965, in Durango, Mexico, to Maria Gardea and Angel Serrato. Martin migrated to the United States when he was 13 years old, where he made Portales, New Mexico, his home for several years. He married Victoria Contreras in November of 1986. At the young age of 13, he started working at the local dairies, where he quickly became a manager for the local dairymen. The dairy industry is what prompted his family to relocate to the Roswell area in the year 2002. For the latter part of his life, Martin received his Commercial Driver’s License and drove a semi-truck. Martin’s interests included spending time with his family, especially his grandchildren. He also enjoyed going to the casinos with his friends. Another one of Martin’s favorite pastimes was eating out. He loved trying authentic Mexican food. There was not a day that would go by that Martin did not call his mom. Martin is survived by his wife, Victoria Serrato and four children, Martin Serrato Jr.(Daisy Serrato) of Roswell, New Mexico, Saul Serrato (Mandie Varela) of Roswell, New Mexico, Marisela Serrato of Oklahoma City, OK, and Angel Serrato of Roswell, New Mexico; 10 grandchildren, Giselle Serrato, Uriel Serrato, Ximel Serrato, Siari Serrato, Leila Serrato, Angel Serrato, Abel Serrato, Ariel Serrato, Azzinet Serrato of Roswell, NM and Jazzlyn Chontal of Oklahoma City, Oklahoma. He is survived by 4 brothers, Jose Angel Serrato Jr. of Dumas, Texas, Lorenzo Cabral, Mario Cabral, Hector Cabral (Erika Cordova) and one sister, Ofelia Lorena Alvarez (Felipe Alvarez) and his mother, Maria Gardea of Portales, New Mexico. He was preceded in death by his father, Jose Angel Serrato. A viewing will be held at Anderson Bethany Funeral Home on Sunday, August 22, 2021, from 12:00 PM to 6:00 PM. A Rosary will be held at St. John the Baptist Catholic Church on Monday, August 23, 2021, at 9:30 AM, followed by a Mass at 10:00 AM. Interment will follow at South Park Cemetery. Martin’s tribute was written in his honor by his family.

It is with great sadness that the family of Martin Serrato announces the passing; Martin Gerardo Serrato, 56, died August 17, 2021, in his Roswell, NM home. Please take a moment and share a kind thought or memory with Martin&#8217;s family at... View Obituary & Service Information

The family of Martin Serrato created this Life Tributes page to make it easy to share your memories.

It is with great sadness that the family of Martin Serrato announces...

Send flowers to the Serrato family.