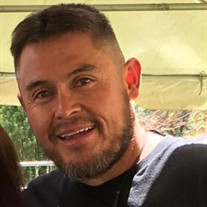 Marvin Henry Bermudez Dunlap. Born in Grants, NM, on December 25, 1970. He was called home on Thursday, March 18, 2021. He is survived by his mother, Millie McCarty and husband Malcom McCarty; father, Gordon Dunlap; sister, Deidra Remde and husband Steve and children: Kaitlin, Kameron, and Kiley; brothers: Keith Dunlap and children: Dominic, Kaden, and Avrie; Darrin Dunlap and wife Heather and children: Sienna, Braeden and Aubrey; sister, Tiffany Dunlap and her children: Serena and Kristina; loving grandmother, Nila Bermudez; aunts: Lorraine and husband Alfred Saavedra, Mary Ann Bermudez, Henrietta Bermudez and Tanya Bermudez; the McCarty step-siblings: Michelle, Dale, Storrie and Shawna; loving Godmother, Christine Hawkins; as well as numerous cousins and extended family. Marvin is preceded in death by his “hero” grandfather, Henry Bermudez. Marvin graduated from Goddard High School in 1989 and went on to play collegiate baseball. He was never a father of his own, but you will never meet a better uncle/funcle to his nieces and nephews. Uncle Marvy adored each and every one of them the same, and they loved him back just as much or more. It never fails, no matter how hard he had worked that day or what he had going on, he would stop what he was doing to spend time with them as if they were his own children. Marvin did amazing work with his hands, from building furniture out of scraps to engineering toys to play with for the kids. His creativity and mindset were unlimited. Over the last few years, Marvin enjoyed drawing and painting as a newfound hobby and became very good at it. He loved to paint and draw pictures with his nieces and nephews and make one of his siblings judge them to decide who made it better. Marvin was very witty and knew how to make you laugh, even in times when nothing seemed to be going right. He was that guy you couldn’t sit next to in church because his sense of humor would get you laughing without him even saying a word. We are pretty sure that Marvin’s favorite pastime was arguing with his older nieces and nephews about any subject that would come up. He had a wealth of knowledge that he’s been able to pass on to his younger siblings and, of course, onto the nieces and nephews he took so much pride in. Marvin had a heart of gold bigger than his own body. If you met a person that didn’t like Marvin, it was very rare, and they probably never got the chance to really get to know him. Marvin became infatuated with the game of disc golf. Over the last couple of years, he became an avid contender in all tournaments he played in, from PDGA sanctioned events to Sunday minis. It’s without question that his disc golf family will be affected by his passing as well. Some of Marvin’s special bonds included his grandmother, Nila. You’ve never seen somebody laugh so hard at the silliest jokes than when you got Marvin around his grandmother. He truly adored her with every fiber in this being. He formed an extremely strong and tight bond with his younger brother, Keith. They were roommates for the last eight years, and without each other, neither one would have survived without struggle. They had their arguments and fights, but I’ll be damned if anybody would have been able to step up and lay a finger on Marvin without his Big Little Brother stepping in. Marvin shared an extremely tight bond with his dad Gordon. Over the last few years, Marvin stepped up his game as son and sibling of the decade. He helped his dad with everyday chores and being Mr. fix it when dad needed something done. He never argued or questioned or griped at anything dad would ask him to do. The strongest bond he had belonged to Marvin and his mother, Millie. Millie is and always will be the backbone of this family. Though he tested her patience and nerves more often than not, Millie loved Marvin unconditionally his entire life. He wasn’t always the kind of person who is big on words and affection, but there’s nobody Marvin loved more than his mom. Rest in paradise, uncle/funcle, brother, and son. We will love you forever! There will be no services at this time, and we will have a private celebration of life at a later date. Please take a moment to share a kind thought or memory with Marvin’s family at www.andersonbethany.com. Marvin’s tribute was written in his honor by his family.

The family of Marvin Henry Bermudez Dunlap created this Life Tributes page to make it easy to share your memories.