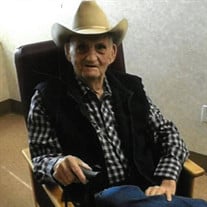 Melvil Harold Tucker went to be with the Lord March 15, 2021. Harold was born June 30, 1926 to George and Effie Tucker in Willow, Oklahoma. Harold moved with his family to Roswell at the age of eleven where he helped the family farm. After high school he joined the Navy where he was a medic. When he returned home, he married the love of his life, Anna Marie Pirtle. They were married seventy years and had four children, Lonnie, Terrell, Destry and Dana. Harold worked numerous jobs including the Roswell Fire Department and as a sergeant for the Roswell Police Department. Harold is preceded in death by his wife Anna Marie Pirtle Tucker, parents George S. and Effie A. Tucker, son Destry Tucker, granddaughter Lisa Ann Tucker Sienkiewich and seven siblings. He is survived by his sons Lonnie R. Tucker and wife, Sandra, Terrell J. Tucker and wife, Peggy, daughter Dana Marie Howse and husband Pat. Grandchildren Cody Tucker, Lori Tucker Davidson, Troy Tucker, Dusty Tucker, Justin Tucker, Kenda Harris, Tiffany Huizenga, Brandon Howse, twenty one great grandchildren, and four great great grandchildren. Honorary pallbearers are his great grandsons and pallbearers are Cody Tucker, Troy Tucker, Brandon Howse, Justin Tucker, Chris Sienkiewich, Trevor Davidson, and Ryon Huizenga. A graveside service will be held on Monday, March 22, 2021 at 11:00am- Memorial Lawn an East 19th. Pastor Suttle of Crossroads Assembly of God Church will officiate. Arrangements are being made by Anderson- Bethany Funeral Home. How do you put a person like Harold on a piece of paper? You can't, it's impossible, but I will try. To the female staff at Avamere, he was known as the handsome cowboy. He kept them smiling. To his children, he was dad, a man that could do everything. He was a good provider and a hard worker. When he wasn't working, you could always find him in his shop, tinkering, or on the porch, whittling. He taught his children right from wrong. Harold was an amazing cook. He loved to read and to build things. The thing I enjoyed the most about him were his stories. We could listen to him for hours and boy did he have things to say! The man could spin a yarn. He would have you on the edge of your seat or rolling with laughter! We will miss him. Heaven will never be the same! He's up there now telling his tales and entertaining the Angels. If only we could have heard one more story, one more song, have a little more time with him. He left us with some beautiful memories and this one of a kind man will be greatly missed!

Melvil Harold Tucker went to be with the Lord March 15, 2021. Harold was born June 30, 1926 to George and Effie Tucker in Willow, Oklahoma. Harold moved with his family to Roswell at the age of eleven where he helped the family farm. After high... View Obituary & Service Information

The family of Melvil Harold Tucker created this Life Tributes page to make it easy to share your memories.

Send flowers to the Tucker family.