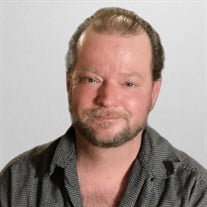 Michael Zachary Michael was an inspiration to all who knew him, and he always had a smile on his face and a joke to follow. On September 25, 1971, Michael was born in Tucumcari, NM., and passed away at home on April 3, 2022, in Roswell, NM. His parents are Laney Chance of Roswell, NM, and Father Timothy Allen Michael of Albuquerque, NM. Funeral services will be held at Anderson Bethany, Roswell, NM, on Saturday, April 23, 2022, at 2:00 PM, with Pastor Tim Arlet officiating. Michael grew up in Albuquerque and later moved to Colorado, where he attended and graduated from Nucla High School. He attained his welding technology degree and worked on many projects in New Mexico, such as the Spencer Museum in Alto, NM, and worked as a welder for White Sands Missile Range. He was part of the Helix program; his fabrication work is currently in space. Michael married his best friend, the love of his life Elizabeth Ann Morales on September 4, 2021, in Carlsbad, NM. He was her protector and supported her in everything she accomplished. Michael was employed at Waide Irrigation Service and Sales as the welding supervisor for over five years. He shared his welding knowledge with every employee who worked in his shop, and on breaks, he would bang out beats. After a long day's work, he enjoyed coming home to his drum set; he was a phenomenal drummer and had played with many bands over the years in Las Cruces, NM. It was therapeutic and brought him great joy to play. He was easy to talk to and was a great listener. His peers and coworkers respected him, many of whom called him friend and brother. Michael was a true-blue Cowboy fan and knew players' stats past and present on every team in the NFL and college leagues. He had a gift for sports and excelled in anything he did. He was an avid fisherman and enjoyed the outdoors and horseback riding. Michael will forever be remembered and carried in our hearts and memories. Michael is survived by his spouse Elizabeth; daughters: Jaimee Williamson and Morgan Morales; grandson Dylan Morales; parents: Laney Chance and Timothy Michael; siblings: Johnny Lee, Benjamin Si, and Kristy Lynn Reid. He is preceded in death by his grandparents: H.T. and Katherine Davis, Joseph A. and Bonnie M. Michael Sr., Richard and Charlene Reid; uncle, Joseph A Michael II; and aunt Theresa R. Michael Vander Wilt. Honorary Pallbearers: Joey Aguilar, Rodney Force, David Garcia, Christina Haagenson, Elijah A. Loya, Christopher Smith, Lazario Soto, and Todd Paul Warpula. The family of Michael wishes to extend sincere thanks to Dr. Ana Arnett and Staff, Altar & Rosary Society, and family and friends for the many blessings they have bestowed on us. Michael's tribute was written in his honor by his loving wife.

Michael Zachary Michael was an inspiration to all who knew him, and he always had a smile on his face and a joke to follow. On September 25, 1971, Michael was born in Tucumcari, NM., and passed away at home on April 3, 2022, in Roswell, NM.... View Obituary & Service Information

The family of Michael Zachary Michael created this Life Tributes page to make it easy to share your memories.

Michael Zachary Michael was an inspiration to all who knew him,...

Send flowers to the Michael family.