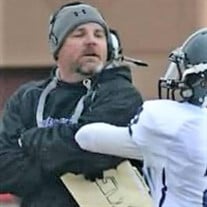 Mick (Coach) Reeves (51) of Roswell, NM passed away on November 6, 2021, in Roswell, while doing what he was born to do, coaching his football boys in the New Mexico 6-man State Championship Game where they won 70-28. Please take a moment to share a favorite memory with Mick’s family at www.andersonbethany.com or on social media with #ripnumber20. SERVICES: There will be a visitation at Anderson Bethany on Tuesday, November 9th from 6:00-8:00 p.m. Funeral services will be held at Church on the Move on Thursday, November 11 at 10:00 a.m. with Pastor Troy Smothermon and Pastor Rick Rapp officiating. Michael Lynn Reeves, Jr. was born to Mike and Mary Reeves in San Bernardino, California on November 25, 1969. Mick and his 3 brothers were military brats until they settled in Roswell, after his dad’s retirement from the U.S.A.F. Mick graduated from Roswell High School in 1989 where he was an outstanding athlete in multiple sports. He led the Coyote Football team to Back-to-Back State Championships his junior and senior year under the leadership of the legendary Coach Jim Bradley. While in High School he set many records and won numerous outstanding athletic awards, including the Street and Smith top 50 football players in the country, as well as the Gatorade Player of the year for the state of New Mexico. He was also awarded the M.V.P. of the North/South All-Star game his Senior year. After graduation, Mick went to Arizona State on a football scholarship. Reeves was then drafted to the Chicago Cubs in the 1991 draft, where he played for the Minor League Huntington Cubs for 3 seasons. Mick then made his return to football by playing for New Mexico Highlands University where he was a Division II All-American. The next year he was invited by the San Francisco 49ers as a free agent. From there he was invited by Finland Professional Football League, where he coached and played quarterback. After completing his professional playing career, he returned to Las Vegas, NM where he coached high school football at West Las Vegas High school and Robertson High School while returning back to college. In 1997, Mick moved back to Roswell, to coach the Gateway Christian High School Warriors in their first year of 6-Man football. While at Gateway, he realized that though people told him his whole life that he was born to play football and baseball, he found his true calling in coaching and mentoring young athletes both on and off the field. While teaching at Gateway, he met and married the love of his life Lisa Hargrove on December 26, 1998, in Roswell. He and Lisa were faithful members of Church on the Move, where they served and raised their 4 children Justin, Trey, Kayli, and Jordan. SURVIVORS: Those left to live on his legacy are his wife, Lisa, his children Justin Winkler of Iowa, Trey, Kayli, and Jordan Reeves of Roswell, his God-son Exzavier; and His grandchild, Sullivan Winkler; and his parents, Mike and Mary Reeves of Roswell; and his brothers Jim Reeves of Roswell, Clark and Lisa Reeves of Tucson, and Sean and Erica Reeves of Gallup NM. He also leaves behind many nieces and nephews that he loved greatly, as well as many teammates and players that he played with and coached. PROCEEDED: Mick is proceeded in death by his grandparents Joseph and Marge McQuirk, as well as his sister-in-law Della Reeves, who was the big sister he never had. HONORARY PALLBEARERS: Blessed to be his honorary Pallbearers are members his Roswell High School football team, as well as former and current players. The family wishes to extend its sincerest gratitude to all of those who have reached out to the family with your prayers, love, and financial support. MEMORIAMS: In lieu of flowers, please consider donating to the Gateway Christian School Baseball Memorial Fund at 1900 North Sycamore in Roswell, New Mexico, 88201. Mick’s tribute was written in his honor by his family.

Mick (Coach) Reeves (51) of Roswell, NM passed away on November 6, 2021, in Roswell, while doing what he was born to do, coaching his football boys in the New Mexico 6-man State Championship Game where they won 70-28. Please take a moment to... View Obituary & Service Information

The family of Mick (Coach) Reeves created this Life Tributes page to make it easy to share your memories.

Send flowers to the Reeves family.