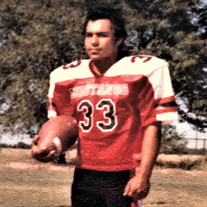 PABLO MACARIO MATTA, 49, passed away on Wednesday, December 16, 2020, in Roswell, New Mexico. No services for Pablo will be held. Please take a moment to share a kind thought or memory with Pablo’s family at www.andersonbethany.com. On December 19, 1970, Pablo was born to Albert A. and Inocencia Matta in Roswell, New Mexico. He was the beloved husband of Estella Matta, and they had one son, Pablo Bob Matta, whom he loved dearly. Pablo worked as a welder and fabricator. His hobbies were raising roosters and collecting rocks. Pablo enjoyed watching football games on Sundays, mainly when his favorite team Tampa Bay Buccaneers played. He will be dearly missed by his friends and family. SURVIVORS: Pablo leaves behind his wife, Estella Matta; son: Pablo Bob Matta; siblings: Albert A. Matta and wife Tammy of Denver City, TX, Robert Matta and wife Sandra of Houston, TX, Jose Matta of Roswell, NM; aunts and uncles: Bill and Espazana Matta of Plains and Susie Curtis of Rowell, NM; nieces and nephews: Robert Matta II and Bianka Matta of Houston, Tx, Eric Landeros and Gabby Landeros of Florida, Alvino and Alex Matta of California, Alan Torres of Denver City, TX; as well as his loving pet, Butter Cup. PRECEDED: Pablo was preceded in death by his parents Albert A. and Inocencia Matta, and his beloved sister: Frankie Ann Landeros.

PABLO MACARIO MATTA, 49, passed away on Wednesday, December 16, 2020, in Roswell, New Mexico. No services for Pablo will be held. Please take a moment to share a kind thought or memory with Pablo&#8217;s family at www.andersonbethany.com. On... View Obituary & Service Information

The family of Pablo Macario Matta created this Life Tributes page to make it easy to share your memories.

Send flowers to the Matta family.