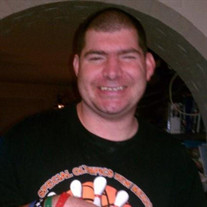 Paul Joseph Marnell passed to his final healing in the morning of May 31, 2021 from complications of progressive cerebral palsy. A Light has moved to heaven! Paul was born in Roswell, NM on May 24, 1980 as the Stanley Cup Playoffs were concluding, and was an avid sports fan ever since. He loved the Dallas Cowboys, the Atlanta Braves, the Albuquerque Isotopes, all basketball, and the Roswell High Coyotes! He often attended Roswell High basketball and football games through the years and wasn’t shy about shouting out coaching “suggestions”. When he could no longer attend games due to his physical limitations, he added watching golf, tennis, ice hockey and ice skating on TV to his favorite pastimes, along with his favorite game shows and a years-long fascination with the news. Paul had a way of leaving an impression on others, with his bold energy and sweet spirit. He had a joy for life and was described as “impish” more than once. He loved talking to people about his interests, thankfully having tolerant neighbors and a patient mailman to indulge him in this. His very favorite pastime was being with Shannon Tyler, the love of his life, with whom he shared a birth date. They met at a Valentine’s Day dance in 2006, being sweethearts from then on, going on bowling, movie, and restaurant dates almost every week for as long as he could. He proudly had her name tattooed on his right arm and loved picking out jewelry and gifts for her for their special occasions! Covid-19 and the acceleration of his illness made dates further apart recently, so they would make video calls to make the separations easier. Thankfully, they were able to share some sweet moments for their birthday before things got too difficult for him to have company. Paul graduated from Roswell High School life skills program in 2001, attending until he was 21. He had so many wonderful teachers during his years in school, enjoying them so much that some of them continued to get random phone calls from him after he graduated (sometimes at awkward hours)--he had an astounding memory for phone numbers matched only by his ability to see the fouls in games he was watching even before referees/umpires could call them. Paul is survived by his father, Dr. Joseph Marnell and girlfriend Chris Hoffman, of Lubbock, TX; by his mother, Melodie (Odom) Marnell and stepmother Linda Cloud, of the home; by his brother W. Christopher Marnell; by his stepsister, Vandy Cloud and her daughter, Kyra; by his foster sister, Melodie Kay Jackson and her fiancé Daniel Guerrero, with children Nathaniel, Josiah, Salyssia and Ysenia; by his foster brother, Daniel Downs and spouse Chad LeBlanc; by his maternal uncle, Denis Odom and wife Rosie of Roswell and their extended family; by his maternal twin aunts, Georgette Kammer and husband Michael of Milton, GA and Gloria Trommler and husband Steve of Ephrata, PA and their extended families; and by many friends--some like family!--who have been close to him through the years. Paul’s memorial service will be held at Christ’s Church on 2200 N. Sycamore Ave. in Roswell, NM, on Tuesday, June 8, 2021 at 1:30 pm. Anderson Bethany Funeral Home is handling the final arrangements for Paul. In lieu of flowers, donations can be made in Paul’s honor to Special Olympics NM or other worthy charity. Please take a moment and share a fond memory or kind expression of sympathy for Paul’s family at www.andersonbethany.com. Paul's tribute was beautifully written in his honor by his loving family.

Paul Joseph Marnell passed to his final healing in the morning of May 31, 2021 from complications of progressive cerebral palsy. A Light has moved to heaven! Paul was born in Roswell, NM on May 24, 1980 as the Stanley Cup Playoffs were... View Obituary & Service Information

The family of Paul Joseph Marnell created this Life Tributes page to make it easy to share your memories.

Paul Joseph Marnell passed to his final healing in the morning...

Send flowers to the Marnell family.