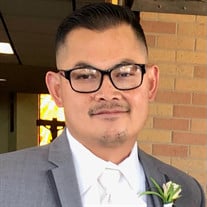 Pitak Hollmann, 38, passed away on Saturday, June 11, 2022, in Albuquerque, New Mexico. Please take a moment to share a kind thought or memory with Pitak’s Family at www.andersonbethany.com SERVICES: There will be a Viewing at Anderson Bethany Funeral Home on Wednesday, June 22, 2022, from 10:00 AM to 6:00 PM, followed by a Rosary at 6:00 PM. A Mass will be held at Assumption Catholic Church on Thursday, June 23, 2022, at 10:00 AM. Pitak was born in Bangkok, Thailand, Asia, on January 6, 1984. His parents were James and Chaleeporn “Tuk” Hollmann. He was raised in the Catholic Faith. He graduated as a salutatorian with honors from Hagerman High School. When he found out he was going to give a speech as valedictorian he purposely flunked a test so he wouldn't have to give a speech. Then Pitak found out as a salutatorian he still had to give a speech anyway, which he did. He was on State Champion football and track teams and was the State Champion Class A pole vaulter two years in a row. Pitak wanted to further his education and attended classes at Eastern New Mexico University-Roswell. Pitak was in the National Honor Society and was listed in "Who's Who Among American High School Students" He also made the Class A State All-Star football team. Pitak was also involved in 4H and enjoyed showing sheep and goats. He loved riding horses growing up. Pitak was a great chef who loved cooking. He was a very friendly, caring, and giving person who loved his family, especially his girls. Everything Pitak did, he always did with a smile on his face. He enjoyed being around his friends, especially playing poker and telling them jokes. Pitak’s sarcasm, infectious laughter, and wise cracks will be dearly missed. SURVIVORS: Those left to cherish memories of Pitak are his children: Analyza Hollmann and Lia Hollmann; parents: Tuk and James Hollmann; grandmother, Marie Hollmann; siblings: Tim Hollmann and wife Vanessa, Katharine Ellsworth and husband Lane; aunts and uncles: Bill, Sarah, Maryellen, Chris, and Kwanruen Thiptanya; as well as his nieces and nephews: Abby and Ally Hollmann, Kimanah, Caleb and Spade Ellsworth. PRECEDED: Pitak was preceded in death by his grandparents: Boonchub Krudtone and Robert Hollmann.

Pitak Hollmann, 38, passed away on Saturday, June 11, 2022, in Albuquerque, New Mexico. Please take a moment to share a kind thought or memory with Pitak&#8217;s Family at www.andersonbethany.com SERVICES: There will be a Viewing at Anderson... View Obituary & Service Information

The family of Pitak Hollmann created this Life Tributes page to make it easy to share your memories.

Send flowers to the Hollmann family.