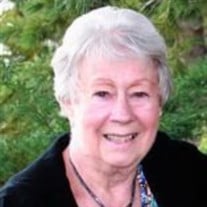 Our precious mother, Rachel Roberta Link Farley, 89, peacefully entered her final resting place on January 17, 2022. Rachel was born on September 18, 1932, in Kirksville, Missouri to Ralph Ransom Link and Dorothy Masters Link. She is survived by her husband of sixty-nine years, Billy Joe Farley. She had two siblings, Veda Jean Turner and Ransom Ralph Link, who preceded her in death as well as her parents. The Link family settled in Arkansas where Rachel met and married the love of her life on June 28, 1952. Bill and Rachel moved to New Mexico in 1959 when her brother, who was passing through on his way to California called about teaching jobs in Alamogordo as Bill was working toward his teaching degree. They packed up their toddler, David and moved to Alamogordo, where they would call home for over sixty years. When her kids were of school age, Rachel worked at Heights Elementary School as the school secretary. Needless to say, David, Dara and Julie could not get away with too much mischief as mom would surely know about it. She would reprimand us before the principal and then we would have to sit in the principal’s office as well. She went on to work for Otero Federal Credit Union at Holloman Air Force Base and then the Alamogordo Branch, where she retired after seventeen years in 1987. Bill and Rachel raised three children, David Farley (Alison); Dara Farley Dana (Randy d-2019); and Julie Farley Lederfine (Eric). Rachel noted on many occasions how their family of five had grown with the birth of their grandchildren, Angela Farley Jones (Andrew); Travis Farley (Jen); Krysta Dana Jones (Jason); Stephanie Dana Eldridge (Shane); and Joshua Lederfine. She also enjoyed their great-grandchildren, Lydia and Noah. Per Rachel’s request, no services will be held. We ask if you knew our mother, remember the wonderful times you had with her and pick up some carnations as she always loved having carnations around the house. Please take a moment and share a kind thought or memory with the Farley family at www.andersonbethany.com. Rachel’s tribute was written in her honor by her family.

The family of Rachel Roberta Link Farley created this Life Tributes page to make it easy to share your memories.