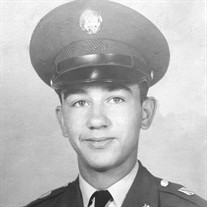 Raymond Marrujo Ward Sr, 72, passed away peacefully at his home on January 19, 2022, in Roswell NM, surrounded by his children. There will be a graveside service with funeral honors at Sacred Heart Cemetery, on February 24, 2022, at 11:00am in Tularosa NM, 88352. On November 15, 1949, Raymond Marrujo Ward was born to Maria Marrujo and Leonard Ward Sr. in Tularosa NM. While attending Tularosa High School he volunteered with the Tularosa Volunteer Fire Department for several years. He enlisted in the United States Army on March 3, 1967, where he received his G.E.D. and attained the rank of SPC-E4 during his service and was Honorably discharged on March 6, 1970. He then attended ENMU-Roswell in 1973 and graduated with a meat cutting degree in 1974, He went on to reenlist in the Army National Guard on November 13th, 1978, during his service he received a Good Conduct Medal, National Defense Service Medal and Rifle: Marksman and was Honorably Discharged on November 12th, 1979. He married Elizabeth “Liz”Jaramillo in 1974 and they had nine children, she continued to be a close friend up until the day he passed. He grew to be a very quiet person, keeping to himself, his children, Liz, and good friend Rosa Goytia. One thing he loved was watching western shows and drinking a beer, those were the moments he lived for besides giving his “pretty bird” a hard time. Raymond Ward will be missed by all that knew him and learned to love his stubbornness. Those left to eternally treasure and cherish Raymond Ward Sr. are his children; Monica Martinez and husband Jose Martinez, Raymond “Teat” Ward Jr, Fabian Ward Sr., and wife Valarie Ward, Reyna Garcia and husband Gerardo Garcia Jr., Elizabeth Ward II “Pretty Bird” and Javier Ward Sr; Grandchildren: Valyssa Ward(Hilario Gomez) , Jeremiah Ward, Querida, Adelita, Casanova, Mariah and Onyca Garcia, Klaryssa (Daniel) Lyons, Jose Jr (Ashley) Martinez, Angel (Vander) Martinez, Domingo (Leslie) Martinez, Ladyslada (Dakota) Burnes and Jovanna Martinez, Hennessy, Ethan and Timothy East, and Javier Ward Jr; Great grandchildren: Thobias Gomez, Vash’ti Rodriguez, Eunice Rodriguez and Zaemond Hobbs all of Roswell, NM, Residing in Texas 23 additional great grandkids; Siblings: Sandra Luevano of La Luz NM, Leonard Ward Jr. of Tularosa NM, Tina Najar and husband Joe Najar of Tularosa NM and numerous nieces and nephews. Raymond Ward Sr. is preceded in death by both parents Leonard Sr. & Maria Ward; children: Francisco and William Ward; Sister: Diana Miller; Nephew: Ricky Najar; Grandchildren: Estrella Olivas Ward, Fabian Ward Jr. and cousin Ernest Reynolds. The family of Raymond Ward Sr. wishes to extend sincere thanks to the staff at Lovelace Hospital ICU Unit, Hospice nurses and Amanda at Anderson Bethany Funeral Home for all the care and kindness they have showed us through this difficult time. Special thanks to all our friends and family for all the help you provided to us; we will be forever grateful. He never looked for praises He was never one to boast He just went on quietly working For the ones he loved the most His dreams were seldom spoken His wants were very few And most of the time his worries Went unspoken too. He was there…. A firm foundation Through all our storms of life A sturdy hand to hold on to In times of stress and strife. A true friend we could turn to When times were good or bad One of our greatest blessings The man that we called Dad.

Raymond Marrujo Ward Sr, 72, passed away peacefully at his home on January 19, 2022, in Roswell NM, surrounded by his children. There will be a graveside service with funeral honors at Sacred Heart Cemetery, on February 24, 2022, at 11:00am... View Obituary & Service Information

The family of Raymond M. Ward Sr. created this Life Tributes page to make it easy to share your memories.

Raymond Marrujo Ward Sr, 72, passed away peacefully at his home...

Send flowers to the Ward family.