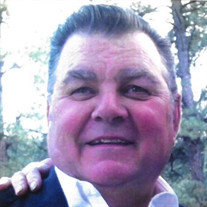 Richard Thee Snow It has been said that you should never go faster than your angels can fly but Richard Thee Snow, known as Frosty, gave his angels a run for their money because he lived life to the fastest and fullest extent. He joined the angels in heaven on Saturday, December 18, 2021, in Roswell, New Mexico at the age of 81. He was born to Elsie and Thee “Sonny” Smith and later adopted by James A. Snow. A few years later became a big brother to three siblings Teddy, Austin and Arthur. Frosty was dealt many obstacles in life. He was diagnosed with polio at the age of 10 and was nominated the European Polio Poster Child for the March of Dimes during their donation fundraiser in the 1950’s. Unable to run and play, he developed the interest and skills to build models of all types. This became a lifetime hobby that he shared and built many friendships throughout his life. Frosty was thirsty for the knowledge of history and was an avid reader learning everything he could about life and cars. Once that Frosty was told that he would never walk again, his determination to live life to the fullest and he never gave up chasing his dreams. He was able to experience sports, riding motorcycles, boating, and skiing, dancing and most of all socializing and drag racing. After high school he began his next season finding employment at the dam in Page, AZ which led to a position as a recovery scuba diver for the Parks and Recreation Service at Lake Powell. Opportunity knocked for him to show his mechanical abilities and knowledge while working at the marina and boat shop which he continued to perfect the rest of his life. In 1963, he met the first love of his life, Judy and they shared three beautiful children. In 1973, he joined the Mill Right Local and went to work for Bechtel as they built a new power plant in Page. He then hired on with Salt River Project moving his family to the White Mountains of Arizona. After the loss of his wife in the late 1970’s, he was challenged with being a single father and keeping his 3 children together. Frosty chose to sell his race cars and focused on being a devoted father to support and raise his children. He spent much quality family time with the Kearny’s and LaMay’s at Elephant Butte, in the woods of Lincoln County and in the Arizona White Mountains keeping families together. His motto was: a family who plays together stays together. After Frosty’s children graduated, he was honored when his son James “Jim” Snow enlisted in the military and served for the country he loved so much while his daughters Teresa and Nicole served in the medical community. Some of his most cherished moments were being able to share the drag race lanes with his son Jim, son-in-law Chris and his grandchildren Dakota and Taylor while the rest of the family played pit crew and cheered everyone on. Frosty has been known to be a hard man but with a heart of gold for he knew life was hard and wanted to make sure that each of his children would be able to withstand the storms of life. His love was tough love while always being unconditional and was always there to see them through. In his early 50’s he was blessed with a second chance at love marrying Karen and adding her daughter, Katy, to his family. They also serve in the medical community. At this time, he was able to retire from Salt River Project and buy back his race cars. After surviving quadruple bypass with complications during the Arizona Rodeo-Chediski Fire in 2002, Frosty and Karen needed to relocate for health reasons and chose Roswell, NM. He reunited with the racetrack community who call him “Snowman”, while his beloved wife continued her passion for pharmaceutical and hospital care. Some of his unexpected accomplishments were to watch all his grandchildren graduate, make it past 60 years of age, being married for twenty years with his beloved wife Karen. And then to proudly receive the first place in the Mopar Race Series in 2016 during his last pass down the track at the age of 76 before retiring his racing career. Friends and family knew him as a loving husband, father, Papa Snow, brother, and friend. As Frosty loved sharing his legacies and endless stories and his laughter. Everything he did came from his heart. Those who preceded Frosty in death are his parents; brothers: Austin and Arthur Snow. Those left to cherish his memory are wife Karen; son, James “Jim” Snow; daughter Teresa and husband Chris Harvey, daughter Nicole Snow and stepdaughter Katy and husband Larkin Sullivan. The grandchildren who were the apple of his eye: Dakota, Taylor, Sierra and Jeremy Snow. His first sweet great-grandson is Aidan. Also surviving are his sister, Teddy and husband Pat Kearny, his LaMay cousins, and his many special friends who enjoyed sharing meals and adventures with him not only in New Mexico but also in the White Mountains of Arizona. Frosty was an amazing man, living an unforgettable life full of love, laughter and passion. We will miss your beautiful soul, and smiling face. Until we meet again and “Thank You” for continuing to be one more Angel watching over us. We Love You! No further arrangements are planned at this time. Obituary was written by family and friends with love. Please take a moment and share a kind thought or memory with Richard’s family at www.andersonbethany.com.

Richard Thee Snow It has been said that you should never go faster than your angels can fly but Richard Thee Snow, known as Frosty, gave his angels a run for their money because he lived life to the fastest and fullest extent. He joined the... View Obituary & Service Information

The family of Richard Thee Snow created this Life Tributes page to make it easy to share your memories.

It has been said that you should never go...

Send flowers to the Snow family.