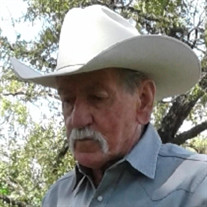 August 27, 2021. Honoring Bob’s wishes, there will be a service at the Church of Christ In Dexter,Saturday September 4th at 10:00AM. Please take a moment and share a kind thought or memory with Bob’s family at www.andersonbethany.com. Bob was a member of the Church of Christ and a good Christian and barely missed church before becoming very ill. He loved the little Church of Christ in Dexter and our preacher, Robert Bowls. On April 14, 1940, Bob was born in the backseat of his parent’s car on their way to a hospital in Dallas, Texas. That was Bob in a nutshell. He always had to be at least an hour early everywhere he went, Bob didn’t want to “miss out” on anything. He loved being around people, telling his stories, and making people laugh at his jokes. The only problem was in Bob’s cowboy drawl, he talked so slow it took him a while to tell the story. When he was a young boy, his parents ran the Oasis cafe on highway 380 east of Roswell. Later, they moved to San Saba, Texas, where Bob attended high school. In 1957, he joined the United States Navy and was later honorably discharged. Finally, around 1960, he came back to New Mexico to spend the rest of his life. Bob was married to Bobbie (Burns) Stinson for seven wonderfully happy years. He will be missed greatly by many. Bob worked for Tesco Signs for many years as a sign hanger. He also worked for Chaves County as a Journeyman Electrician for nearly twenty years, then he retired. After his retirement the Courthouse was never decorated for Christmas again. The love of his life was team roping. His saying was, “I worked only to pay my entry fees.” He had a box full of buckles, several saddles, misc. tack items, jackets, etc. He enjoyed every minute of roping. Bob was indeed a happy man and liked every job he had. Dancing to a good western band was one of his favorite things, and he did beautiful leatherwork and tooling. Those left to cherish Bob’s memory are his wife, Bobbie (Burns) Stinson, His children Sherry Sullivan, Michael Stinson, Theresa Stinson, Bobby Wayne Stinson, and Connie Stinson; Step-Daughter, Jeanie Vaughn, Numerous grandkids and great grandkids including his sparring buddy Maggi Loudermilk. He was preceded in death by grandmother, Ruby Ann (mom) Cole Stinson of whom he was very fond; and his Great-grandfather, Pappy Cole; and his brother Tony Stinson. Those honored to serve as Honorary Pallbearers are: Jessie Lourdeermilk, Colton Loudermilk, Jimmy Loudermilk, DJ Blake, James Blake, Sam Seely, Matt Seely, and Bob Schneider. The Stinson family would like to thank Leandra J. Finney ACNP-BC and her medical assistant Mary McKenna, Dr. Daniel Ridout, Dr. Yazan Alkhouri, Dr. Emilio Araujo, Mike Roberts of Encompass Home Health, Chelsea of Kindred Hospice, and Phill of Kymera Chemo Center for the support and care that was given to Bob. Bob’s tribute was written in his honor by his family.

August 27, 2021. Honoring Bob&#8217;s wishes, there will be a service at the Church of Christ In Dexter,Saturday September 4th at 10:00AM. Please take a moment and share a kind thought or memory with Bob&#8217;s family at www.andersonbethany.com. Bob... View Obituary & Service Information

The family of Robert Joe Stinson created this Life Tributes page to make it easy to share your memories.

Send flowers to the Stinson family.