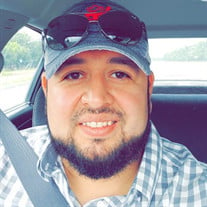 An Emergency Medical Technician, ROBERTO C. VILLA JR, 35, passed away on Sunday, January 31, 2021, in Albuquerque, New Mexico, after a brief illness. Please take a moment and share a kind thought or memory with Roberto’s family at www.andersonbethany.com. SERVICES: There will be a Rosary for Roberto at Anderson Bethany Funeral Home on Monday, February 8, 2021, at 6:00 PM. A Mass will be held at St. John the Baptist Catholic Church on Tuesday, February 9, 2021, at 10:00 AM. Interment will follow at South Park Cemetery. On August 28, 1985, Roberto was born to Manuel and Maria Villa in Scottsdale, Arizona. He graduated from Dexter High School and later got certified as an Emergency Medical Technician (EMT). He was the beloved husband of Sydney Villa, who he married on June 1, 2020, in Roswell, New Mexico. Roberto liked playing video games, playing sports and spending time with his friends. He enjoyed watching sports on TV, mostly if they were the Boston Red Sox, Michigan Wolverines, Gonzaga Bulldogs, LA Chargers, or the Denver Nuggets. Roberto’s family was his #1 priority, he loved them very much. He will be missed by his family and friends. SURVIVORS: Those left to cherish memories of Roberto are his spouse, Sydney Villa; parents, Manuel and Maria Villa; sister, Claudia Martinez and husband Ricardo; nephews: Sebastian and Ricky Martinez; as well as an endless number of friends. HONORARY PALLBEARER: Blessed to serve as Honorary Pallbearers are Casey Steely and Ricardo Martinez Jr. PALLBEARERS: Honored to serve as Pallbearers are Rafael Rodriguez, Everardo Carrillo Villa, Ricardo A. Puentes, Jon Roberts, Joe De La Rosa, Blayne Rochelle, Jimmy Aragon, Dominic Bell and Anthony Gomez.

The family of Roberto C. Villa Jr. created this Life Tributes page to make it easy to share your memories.

Send flowers to the Villa family.