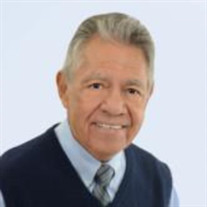 Romulo (“Bobby”) Guerra Villegas was born on September 21, 1940 in Silver City, N.M. to Romulo Martinez Villegas and Basilia (“Mima”) Guerra Villegas. He grew up poor but always felt rich because he was taught by his parents to play music and sing songs at a young age, which fueled his lifetime passion for music. Romulo Sr. worked in the mines and died from silicosis when Bobby was young. Bobby had to work in the onion fields with Mima to make ends meet. He was troubled by how badly Hispanics were treated in the fields. Life was difficult but Mima taught him a strong work ethic and that he was a valuable gift from God. Most importantly she taught him to never let the “gringo” mistreat him or believe that he was anything less. Bobby became an advocate for the Hispanic community and the little person who needed a voice. He was admittedly bad in school but had a knack for finance. After high school and his military service, he found a job working in finance in Las Cruces (imagine trying to collect car payments in Juarez) when he met Jerry Pritchard who asked him to set up the finance department for a new Chevrolet dealership in Roswell. Jerry told him that he could leave once the finance department was set up. Bobby never left because he learned to love Roswell so much. He continued his passion for music, specifically boleros, when heard his calling to be a mariachi. He met Isidore (“Izzy”) Gutierrez and formed the duo Canela and entertained the Roswell area for many years. The holiday parties and celebrations at Bobby’s house were unparalleled. He went on to play music with Gilbert Licon and completed his musical journey with his “daughter” Blacita Herrera. Blacita and his son-in-law Chris were by his side and played Las Mananitas for him before he took his last breath. Bobby’s list of community service accomplishments transcend five decades. You can walk into his Farmers office and see the wall to wall history of his contributions. Most notably, he was the founding father of the Roswell Hispano Chamber of Commerce, Pinatafest, and SOY Mariachi. He was a community activist often times labeled a “rabble rouser” and “racist” for promoting Hispanic causes. He embraced his role as a lightning rod for social causes and knew that change was never easy. He wanted acknowledgement for Hispanic historical contributions to Roswell and tried to get Hispanics on every board and political position possible. He believed the cultural makeup of government should reflect the population it represents. He had a penchant for writing unedited letters (despite our best efforts at editing them) to the Roswell Daily Record and wallowed in the responses. He quietly fortified his advocacy by helping anyone and everyone who asked for it. He was proudest of his reputation for helping strangers and those in need. He believed there was no greater calling in life than serving others in your community. Bobby’s keen business sense led him to open the LOF shop on North Main so his children could develop a work ethic. He had an epiphany after his teenagers wrecked multiple vehicles and saw the value in selling auto insurance when he opened up Farmers Insurance Group in 1986. He had a sharp wit and comedic timing that made him the center of attention wherever he went. His Farmers family, Jose, Sandra, Leslie, and Edubina enriched his life working side by side with him and laughing at all of his jokes, even the bad ones. He was a successful businessman with the help of others and wanted to thank everyone that helped him along the way. Bobby loved adventures and was an avid runner and hiker. He traveled the world looking for the next adventure and trekked Alaska, Spain, Africa, China, Peru, Nepal, and basked in the sun and sand of the U.S. Virgin Islands. His greatest adventure was in the recesses of his mind meditating at the golf course pond with Papitas by his side. He had a very personal relationship with God and claimed to personally know Marcus Aurelius, Plato, Socrates, Aristotle, and the Dali Lama through his meditation. He didn’t want to just live life. He wanted to live an authentic one. Those that are left behind to continue his legacy of love are Irene Villegas (his wife and lifetime partner), children Veronica Rodriguez (Chris, Daniel, and Brianna (Matt)), Adam Villegas (Cheree, Brittany, Brandon, Brady), Gabriel Villegas (Madel, Diego, and Isabel), Romo Villegas (LaDawn and Dominic), Matthew Villegas, and great grandchildren Janiyah, Jaelyn, Josiah, Khaleesi, and Brooklynn. He was an unconventional loving father, husband, grandfather, and great grandfather. Special thanks to Roberta and Andrew for their help in his final moments of life. There are no public services planned at this time due to COVID. He would want us to encourage everyone to get vaccinated. We talked with Bobby about celebrating his life with a gran fiesta starting at St. John’s with mariachis and other community leaders and political muckety mucks from around the state. He scrapped that idea and instead wanted the people of Roswell to celebrate by taking up a social cause or community service to help others in need. In lieu of gifts or donations, please donate your time to a cause important to you and make this world a better place before you are called home.

The family of Romulo ("Bobby") Guerra Villegas created this Life Tributes page to make it easy to share your memories.