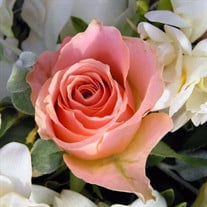 Rosa A. Showers (Rand), 69, passed away on Friday, October 22, 2021, in Roswell New Mexico. Please take a moment to share a thought or memory at www.andersonbethany.com. There will be no funeral services and she will be cremated, with her remains buried next to her late husband, as per her wishes. Rosa was born on June 7, 1952, to Antonio and Antonia Rand in Chihuahua, Chihuahua, Mexico. She moved to the states with her mother and brother after her father passed away and eventually ended up in Roswell. She completed her licensure in nursing in 1977 and practiced as a nurse until 2001, when she had to stop practicing due to a stroke that left her unable to continue. She was a wonderful nurse and was loved by all her co-workers and patients. Rosa was a person who always remembered small details about others and took the time to get special gifts for them. She remembered birthdays and would always send birthday cards. During holidays, she always had a special gift for those close to her. She loved cats and always had a happy cat with her, that she loved and spoiled. She also loved the ocean and one of her wishes was to return to Corpus Christi, where she had once went with her mother. Rosa had two good friends, her neighbor, Ed Stanford and her landlord, Ben Stanford. They both checked on her regularly and kept her company. She was fortunate to have them near her and the family is grateful. Rosa (Tia Rosa) is survived by her nieces, Susanna Rand and Rosaura Rand; her nephew, Antonio Rand; her great-niece, Amanda Silvas and her great-nephews, Mario Silvas, Victor Silvas, Jacoby Rand, and Jonathon Rand. She also had numerous great-nieces and nephews, as well as many cousins. Rosa is preceded in death by her husband, Joseph E Showers, whom she married on April 27, 1982; her mother, Antonia Rand; her father, Antonio Rand; and her only sibling/brother, Antonio Armando Rand. Rosa’s tribute was beautifully written in her honor by her family.

Rosa A. Showers (Rand), 69, passed away on Friday, October 22, 2021, in Roswell New Mexico. Please take a moment to share a thought or memory at www.andersonbethany.com. There will be no funeral services and she will be cremated, with her remains... View Obituary & Service Information

The family of Rosa A. Showers created this Life Tributes page to make it easy to share your memories.

Send flowers to the Showers family.