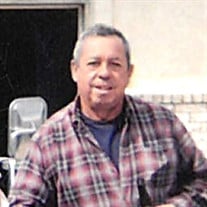 Ruben Trujillo, 74, passed away on Sunday, June 19, 2022, in Roswell, New Mexico. Please take a moment and share a kind thought or memory with Ruben’s family at www.andersonbethany.com. On March 18, 1948, Ruben was born to Manuel and Annie Trujillo in Fort Sumner, New Mexico. Ruben has thirteen siblings, six brothers, and seven sisters. After graduating high school, he enlisted in the United States Army and was stationed at Fort Bliss, Texas. Ruben served in the Vietnam War and was awarded several medals. He was awarded a National Defense Service Medal, Vietnam Service Medal w/1Bss, a Good Conduct Medal, and a Medal for Expert-Rifle. He was trained as a specialized truck driver. After his Army career ended, Ruben served fifteen years in the National Guard. Before retirement, he worked as a Superintendent for the Chaves County Road Department for twenty-eight years. Preceded: Ruben is preceded in death by his baby girl, Betty Jo Linda Trujillo, his father and mother Manuel and Annie Trujillo, and his two brothers, Jesse Trujillo and Andrew Trujillo. His sister Carron Trujillo, his nephew Sean Henry Trujillo, niece Kc Jean Trujillo and brother in law Terry Kirby. Survived: Those left to cherish memories of Ruben are his beloved wife, Esther Trujillo; His children: Mark and wife Karine Salas, Donna and husband Octavio Meza, Jessie McGeorge, Sandra and husband Robert Torres, Sherry Melissa (Missy), and husband Sai Lesa; and his bonus kids whom he loved as his own Charlotte and husband Mark Pennell and Faustino and Candy Garcia. He has twelve grandchildren: and four great-grandchildren. His siblings also survive Ruben: Sonny and wife Francis Trujillo, Larry Trujillo, Joe Trujillo, Elizabeth and husband Paul Weikle, Terri and husband Gary Lehrman, Sharon Kirby, Lydia and husband Andy Ortega, Connie and husband Jesus Baca, Susie and husband Tommy Bleeker, as well as many friends of the Eagles Fraternal Order. Ruben loved his family, especially his grandchildren, and enjoyed spending time with his friends and loved ones. Ruben considered numerous friends like family. His family and friends will dearly miss him. Pallbearers include Mark Salas, Flavio Garcia, Nathan Torres, Noah McGeorge. Honorary pallbearer Jacob Trujillo, Christopher Trujillo and Joseph Palacios. God saw you getting tired, and a cure was not to be. So, he put his arms around you and whispered, “Come with me.” With tearful eyes we watched you suffer and saw you fade away. Although we loved you dearly, we could not make you stay. A golden heart stopped beating hard working hands at rest. God broke our hearts to prove to us...He only takes the best! -Author Unknown Services: A Viewing for Ruben will be held at Anderson Bethany Funeral Home on Thursday, June 23, 2022, from 9:00 AM to 5:00 PM. A Rosary will be recited at Anderson Bethany Funeral Home on Friday, June 24, 2022, at 9:30 AM, followed by a Funeral Service at 10:00 AM. Interment will follow at South Park Cemetery.

Ruben Trujillo, 74, passed away on Sunday, June 19, 2022, in Roswell, New Mexico. Please take a moment and share a kind thought or memory with Ruben&#8217;s family at www.andersonbethany.com. On March 18, 1948, Ruben was born to Manuel and Annie... View Obituary & Service Information

The family of Ruben Chaves Trujillo created this Life Tributes page to make it easy to share your memories.