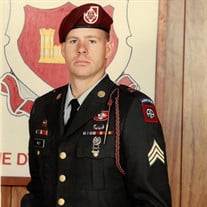 Russell Keith West, 54, passed away on Thursday, October 7, 2021, in Roswell, New Mexico. Please take a moment and share a kind thought or memory with Russell’s family at www.andersonbethany.com. On January 24, 1967, Russell was born to Duane and Alma West in Alamogordo, New Mexico. He went to Del Norte High School in Albuquerque, New Mexico. Russell enlisted in the United States Army and served with the 82nd Airborne Division in Fort Bragg North Carolina. Russell proudly received numerous awards and medals such as Army Achievement Medal 1st Oak Leaf Cluster, Army Lapel Button, Army Service Ribbon, Good Conduct Medal, Kuwait Liberation Medal, NCO Professional Developmental Ribbon, National Defense Service Medal, South West Asia Service Medal w/2 Bronze Stars, Air Assault Badge, and a Parachutist Badge. Russell worked as a heavy equipment operator and calibrations specialist. Russell was honorably discharged six years after serving. He was a lifetime member of the 82nd Airborne Division Association, American Veterans DAV, VFW of Alamogordo Chapter, USO, and multiple American Legion Chapters. He was an American Legionnaire and a life supporter, and a member of America’s Veterans. Russell will be missed by his family. SURVIVORS: Those left to cherish memories of Russell are his daughter, Amber West; sister, Deborah and husband Melvin Ragan; niece, Daylene Myers; and his four nephews: Joshua Ragan, Joseph Ragan, Thomas Ragan, and Levi Ragan. PRECEDED: Russell is preceded in death by his mother, Alma West; father, Duane West; and niece, Brandie Ragan. In lieu of flowers, the family asks for donations to be given to any Veteran Association, DAV, or 82nd Airborne Division Association, and Wounded Warrior in honor of Sgt. Russell Keith West. Russell’s family would like to thank all family and friends for their support. The Desert Road The waxing moon hangs in the night. Casting down it’s eerie light. Upon the desert’s sleeping night Over which we soon may fight. I feel that soon we'll have to go. There will be no blinding snow. Tis only sand that these winds blow Into the eyes for tears to flow. I sit and gaze across the land To which we flew to lend a hand. We wait to fight the evil man who Attacks his neighbor without a plan. I sit here now and simply stare At the iron beasts with which we dare To mold the land to suit our ware, Wondering if they even care. We are engineers by trade. You can tell the road we made. The road is rough, for quickly made With rocky marl and metal blade. By: Sgt. Russell K. West 82nd Air Born Engineers Desert Storm Veteran

The family of Russell Keith West created this Life Tributes page to make it easy to share your memories.

Send flowers to the West family.