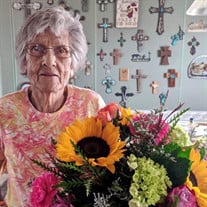 Ruth Rochelle, 81, died from COVID-19 on January 5 at Eastern New Mexico Medical Center in Roswell, New Mexico. She was born August 30, 1939 in Muskogee, Oklahoma, the daughter of Richard Frank and Reba M. Heck. Ruth graduated from Eastern New Mexico University with a master’s degree in Psychology and then worked thirty years as a Rehabilitation Counselor; first for the State of New Mexico and then in private practice. She made many friends along the way. Ruth married her longtime sweetheart, William Everett Rochelle on October 20, 1959 in Arkansas City, Kansas. They had four children, William Edward, Sabrina Michelle, Elizabeth Rhea and Richard Daniel. In 2005 they retired to Lake Havasu City, Arizona where they spent 15 happy years. In 2019, they celebrated their 60th anniversary with friends and family in Lake Havasu City, Arizona and shortly after returned to Roswell, New Mexico to be with their son, Danny, his wife Liz, and other family. She was active in several churches including New Hope Church in Lake Havasu City and Berrendo Baptist Church in Roswell. Ruth spent as much as her leisure time as possible sewing and belonged to several sewing groups. She brightened many people’s lives with her carefully crafted gifts. In addition to her parents, she was predeceased by a sister, Marilee and her oldest son, Eddie Rochelle. Surviving in addition to her husband, Everett, are her daughters (Sabrina and Beth) and her son (Danny) and their loving spouses. Ruth and Everett were blessed with eleven grandchildren and currently have eleven great grandchildren. All have been a source of great pride. Ruth’s mortal remains were cremated by Anderson Bethany in Roswell and will later be spread by her family per her instructions. At this time, a memorial service is not planned due to Covid-19, but your notes of remembrance would be greatly appreciated. The family asks that in lieu of flowers you donate to the Alzheimer’s Association or first responders to honor those who cared for her at the end.

The family of Ruth Rochelle created this Life Tributes page to make it easy to share your memories.

Send flowers to the Rochelle family.