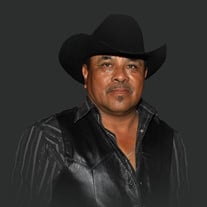 Salomon “Mon” Moreno Jr., a longtime resident of Hagerman, New Mexico, passed away peacefully at his home at the age of 65. He was born in El Porvenir, Chihuahua, Mexico, on June 2, 1956, to Salomon Moreno Sr. and Josefina Moreno. Salomon is preceded in death by his son Elias Macias Moreno; daughter Esenia Macias Moreno; sister Bertha Moreno; brother Mario Moreno; his father Salomon Moreno Sr.; his mother Josefina Moreno and his son-in-law Dominic Marquez. Those left to carry his legacy are his sons Eliazar, Ernesto and his wife Didia, Enrique, Efren and his wife Marina, his daughter Elva, his grandchildren Elias, Jacob, Matthew, Joshua, Ethan, Julisa, Jared, Anna, Jazmine, Levi, Ivan, Lee Lu, James, Sophia, and Yuna, his great grandchildren Aliyah and Athena, his siblings Javier and wife Mari, Armando and wife Josefina, Lorenzo and wife Leticia, Arturo and wife Carol, and Bertha, and his many nephews and nieces. Salomon was a hard-working agriculturist whom pridefully immigrated to the United States in 1979 in search of a better life for his family. He was a skilled farmer for Marshall Farms from 1979 until his retirement in 2020. He had many passions outside of work, although he mostly enjoyed maintaining his yard, working on his 1972 Chevy pickup, and being surrounded by family. Services will take place on Thursday, March 10, 2022 at St. Catherine Catholic Church, in Hagerman, NM. The visitation will commence at 9:00 a.m. with the rosary being recited at 10:00 a.m, the funeral mass is scheduled immediately after and burial to follow at Hagerman Cemetery. Please take a moment and share a kind thought or memory with Salomon’s family at andersonbethany.com. or visit us on Facebook. Salomon’s tribute was written in his honor by his family.

Salomon &#8220;Mon&#8221; Moreno Jr., a longtime resident of Hagerman, New Mexico, passed away peacefully at his home at the age of 65. He was born in El Porvenir, Chihuahua, Mexico, on June 2, 1956, to Salomon Moreno Sr. and Josefina Moreno.... View Obituary & Service Information

The family of Salomon "Mon" Moreno Jr. created this Life Tributes page to make it easy to share your memories.

Send flowers to the Moreno family.