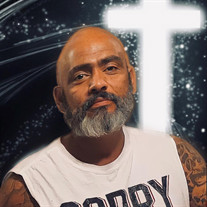 Our beloved Santos Coronado gained his wings on January 17, 2022, to reunite with his parents, Moises Coronado Sr. & Maria &#8220;Teri&#8221; Coronado, who gave birth to him on November 30, 1977. Santos is survived by the love of his life, Cecelia... View Obituary & Service Information

The family of Santos Jesus Coronado created this Life Tributes page to make it easy to share your memories.

Send flowers to the Coronado family.