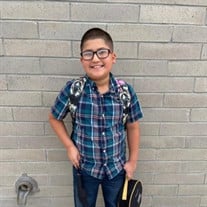 With much sorrow, the family of Sean Jaden Lovato, 10, entered into rest on Friday, October 1, 2021. Please take a moment and share a kind thought or memory with the Lovato family at www.andersonbethanv.com Services: A Funeral Services will be held at Anderson Bethany Funeral Home on Wednesday, October 6, 2021, at 2:00 PM, with Gene De Los Santos officiating. Interment will follow at South Park Cemetery. On December 19, 2010, Sean was born to Timothy and Stephanie Lovato in Roswell, New Mexico, where he attended Del Norte Elementary School. Sean liked to stay active, and he was involved in baseball at Noon Optimist, Karate at Black Dragon, and played football. He was also a member of El Calvario Church. Sean was a bright young man, he was on the honor roll and a black belt in Karate. Sean’s spirit, smile, and presence will be dearly missed by all. Survivors: Those left to eternally treasure and cherish memories of Sean are his parents: Tim and Stephanie Lovato; sister, Lexi Lovato; grandparents: Rev. Enrique Trujillo, Ernie, and Nancy Lovato; uncle Eric and Renee Trujillo and cousins: Michael, Britany, and Gabriel Trujillo; uncle Dave and Tara Lovato and cousins Jalen and Landen Lovato; uncle Michael and Christina Lovato; auntie Victoria Lovato; cousins: Jesus Baca IIII and Jaycee Baca; and Sean’s beloved four-legged best friend, Baymax. Preceded: Sean is preceded in death by his maternal grandmother, Carron Trujillo (Mama Carron), aunt KC Trujillo-Baca; uncle Sean Henry Trujillo; paternal great-grandfather, Joe I. Lovato; and his great-grandmother, Aurelia Medina. Pallbearers: Those honored to serve as Pallbearers are Eric Trujillo, Gabriel Trujillo, Michael Trujillo, David Lovato, Michael Lovato, and Richard Bell. In lieu of flowers, donations in Sean’s memory may be sent to GoFundme.com. The Lovato family wishes to extend sincere thanks to everyone who has made donations and sent prayers for our family during this difficult time. If ever there is tomorrow when we're not together… there is something you must always remember. You are braver than you believe, stronger than you seem, and smarter than you think. But the most important thing is, even if we're apart… I'll always be with you. -Winnie the Pooh

With much sorrow, the family of Sean Jaden Lovato, 10, entered into rest on Friday, October 1, 2021. Please take a moment and share a kind thought or memory with the Lovato family at www.andersonbethanv.com Services: A Funeral Services will... View Obituary & Service Information

The family of Sean Jaden Lovato created this Life Tributes page to make it easy to share your memories.

With much sorrow, the family of Sean Jaden Lovato, 10, entered...

Send flowers to the Lovato family.