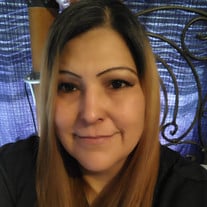 Stephanie Salazar, 47, of Roswell, New Mexico, passed away on Sunday, October 3, 2021, at Eastern New Mexico Medical Center. Please take a moment and share a kind thought or memory with Stephanie’s family at www.andersonbethany.com. SERVICES: There will be a Viewing for Stephanie at Anderson Bethany Funeral Home on Friday, October 15, 2021, from 1:00 PM to 6:00 PM. A Funeral Service will be held at Anderson Bethany Funeral Home on Saturday, October 16, 2021, at 11:30 AM. Stephanie’s final resting place will follow at 636 E. Orange. On December 26, 1973, Stephanie was born to Stephen S. Aguilar and Ermalinda R. Duran in Roswell, New Mexico, where she graduated. She was the beloved wife of Josh (Bobby) Salazar, whom she married on August 14, 2010, in Roswell, New Mexico. Stephanie was a member of Christian Outreach Ministry Church, where she was involved in the nursery and teen church. Prior to her sickness, she worked for several years at Kentucky Fried Chicken (KFC) as a manager in Artesia, New Mexico. Stephanie was a very loving person and truly loved her children very much. Stephanie was raising her grandson, Angelo Lopez. She was also willing to take in her nephews, Israel Cavazos and Jericho Ortega, for a while to discipline them because she had more authority over them. When Stephanie said something, they wouldn’t hesitate at all. One time, Jericho decided to run from her, and boy, she went after him down the alley until he got tired and stopped, and she told him to get in the car, or she was going to drag him in. Stephanie was a very quiet person, but don’t get her mad or mess with her children or family. Stephanie loved doing arts and crafts, especially for the holidays and special occasions. She wanted the holidays to feel special for everyone, adults as much as kids. Stephanie liked cruising with the car club, “Somos Familia.” She enjoyed going to the car shows with her husband and loved to dance at all the events, and she could move. Stephanie loved to cook for her family and others. She was always asking others if she could help with cooking. Stephanie also liked to go to the Bottomless Lakes to camp out with her family. She loved to watch movies, when her children were younger, she would take them to the free movies and would sometimes call her mom to save her a place in line when she was running late. Stephanie was involved with her children for baseball. She was a fanatic of boxing and football and especially enjoyed watching games of her favorite team, the Raiders. She loved to be with her mom to drink coffee and visit. Stephanie will be so missed by her family and friends. SURVIVORS: Those left to eternally treasure and cherish memories of Stephanie are her husband, Josh (Bobby) Salazar; children: Katrina Lopez, Marissa Lujan, Elisha Herrera; grandson, Anglo Lopez; mother, Ermalinda Duran; mother-in-law, Julia Salazar; grandfather, Eddie Trujillo; brothers: Ralph Orlando Melendez and Stephen Aguilar Jr; aunts and uncles: Margie Ramirez and fiancé David of Roswell, Luis Gonzales and wife Judy, Hiram and Gloria Ortega of Idaho, Donna Gonzalez, Betty Gonzales and fiancé Fred Lesha of Sacramento, California; nieces and nephews: Santiago Juarez, Angel Villines, April Melendez, Emanual Melendez, Cristal Melendez Garcia, Shyenne Melendez, Jericho Aguilar, Diego Estrada, Briella Aguilar; as well as several close friends. PRECEDED: Stephanie was preceded in death by her sister, Cristal Lee Aguilar; father, Stephen S. Aguilar; stepfather, Daniel Duran; grandparents: Cruzita Trujillo, Isabel Aguilar; grandfather, Eddie Aguilar (Shorty), late husband, Chris Lujan; uncles: Artie (James Brown) Ramirez, Ismael (Joe) Ramirez, Leo Fajardo Gonzales; and her cousin, Matthew Ramirez. HONORARY PALLBEARERS: Blessed to serve as Honorary Pallbearers are Elisha Herrera, Ralph O. Melendez, Stephen Aguilar Jr, Marissa Lujan, Daniel Aguilar, Israel Cavazos, Jericho O. Aguilar, Luis Gonzales, Destiny Aguilar, and Christopher Andazola. Stephanie’s tribute was written in her honor by her mother Ermalinda Duran and Angelica Barraza.

The family of Stephanie Salazar created this Life Tributes page to make it easy to share your memories.

Stephanie Salazar, 47, of Roswell, New Mexico, passed away on...

Send flowers to the Salazar family.