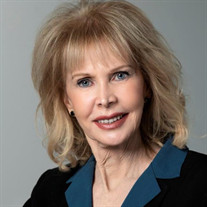 Thelma Lee Ayers, 81, of Gladwyne, PA passed away after a brief battle with uterine cancer Monday, October 25th 2021 at her home, attended by her husband, Philip E. Franks and her daughter, Rhonda Ayers-Hanley. She is survived by many family members: her three adult children, Roger Ayers and Byron Ayers, both of Denton, TX and her daughter, Rhonda Ayers-Hanley, of Canyon, TX and Ruidoso, NM and her partner, Marvin Sterrett; four grandchildren, Kelly Ayers-Spry and husband Robert, Kacy Ayers-Ziegler and husband Mark, all of Denton, TX. Allen Hanley of Ruidoso, NM and Alyssa Hanley of Kerrville, TX; four great-grandchildren: Kyle, Hailey, and Cora Ziegler and Samuel Spry, all of Denton, TX; Philip’s adult children and their children, Jennifer Franks-Baker and husband Chuck of Malvern, PA; Jason Franks and wife Tracy of Irvington, NY; and Philip’s grandchildren, Ava, Finn and Kelly Franks of Irvington, NY; and Michael and Ryan Baker of Malvern, PA. She is also survived by her siblings: sister, Ella Lee-Storms and husband Harvey (Stormy) of Capitan, NM; brother, Eddie Lee and wife Linda of El Paso, TX; sister Elaine Lee-Wallen and husband, Steve of Carlsbad, NM; and sister, Cheryl (Shay) Lee-Patterson and husband Donnie of Lake Dallas, TX. In addition, she is survived by a number of nieces, nephews and cousins. Thelma loved her family. She spent hours on the phone with various members and when together she had a big smile and warm hugs for everyone, but especially for the grandchildren and great grandchildren. Her pride in them was irrepressible. Born and raised in Roswell, NM, Thelma and Philip were high school classmates who reconnected at their 50th year high school reunion. By 2017 both had lost their spouses, and their friendship grew quickly, whereupon Thelma moved to Gladwyne in 2018, welcomed and enthusiastically embraced by Philip’s children and grandchildren, the couple was married on Valentine’s Day 2020 at the Valley Forge Baptist Church in Upper Providence Township, PA. Thelma was a blonde; high-energy, adventurous, and vivacious woman who enjoyed everyone she met, providing each with a warm Texas-friendly hug. Thelma lived most of her life in the Dallas area. During her three decades of residency in Denton, TX she earned a Bachelor of Science degree, graduating Magna Cum Laude, in May 2001, from the Texas Woman’s University in Denton, TX. She even had a side gig as a background actor on the TV series “Dallas”; appearing with Larry Hagman and other members of the cast in several episodes. Still maintaining her interest in acting, she was actively pursuing acting opportunities in the Philadelphia area. She was always entertaining at her Denton, TX home; hosting family gatherings on holidays and special events with her grandchildren. She enjoyed cooking everything for these events, especially anything sweet. During the years of her residency in Denton she was a volunteer at the local hospital, an activity which she continued at the Bryn Mawr Hospital near her home in Gladwyne, PA. She was an avid walker and jogger until knee pains curtailed her running. Nevertheless, she remained an energetic, fast walker, a fact to which her husband can attest. Always looking for the next adventure, Thelma decided to celebrate her 80th birthday by jumping from a perfectly good airplane to experience the thrill of skydiving. Upon surviving her first sky diving adventure she was asked if she was ready to do it again, to which she responded with gusto, “NOT IN THIS LIFETIME”. Still looking for the next adventure, Thelma and her husband made a recent trip to Niagara Falls, NY and in jest, discussed going over the falls in a barrel to celebrate their 82nd birthdays. At the Falls Visitor Center there were photos of a woman who had survived such an adventure more than 100 years ago, who after being pulled from her barrel, was photographed, badly bruised, and bloodied from her trip. That imagery put a damper (pun intended) on that idea. Thelma was a devoted Christian with a strong Pentecostal background focused on keeping up on her daily devotions. She could easily quote Bible scripture and play the piano and sing the traditional hymns of worship and regularly attended worship services, albeit remotely for the last 18 months. Thelma was predeceased by her parents Robert and Flora Lee; daughter-in-law, Janette Ayers; and her husband of 32 years, Alan Guendler. Thelma was cremated and her ashes will be returned to Roswell, NM where a memorial service will be held on November, 24th @ 2:00pm at Anderson-Bethany Funeral home with interment to follow at South Park Cemetery. Thelma´s tribute was written in her honor by her family.

Thelma Lee Ayers, 81, of Gladwyne, PA passed away after a brief battle with uterine cancer Monday, October 25th 2021 at her home, attended by her husband, Philip E. Franks and her daughter, Rhonda Ayers-Hanley. She is survived by many family... View Obituary & Service Information

The family of Thelma Lee Ayers created this Life Tributes page to make it easy to share your memories.

Thelma Lee Ayers, 81, of Gladwyne, PA passed away after a brief...

Send flowers to the Ayers family.