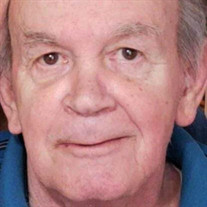 Thomas J. Merritt Jr. November 15, 1944 – July 23, 2021 Tommy flew away with Jesus early Friday morning July 23, 2021, with family holding his hands. Please take a moment and share a kind thought or memory with Tommy’s family at www.andersonbethany.com. There will be a Viewing at Anderson Bethany Funeral Home on Wednesday, July 28, 2021, from 1:00 PM to 4:00 PM. A Funeral Service will be held at Christ’s Church on Thursday, July 29, 2021, at 10:00 AM. Interment will follow at South Park Cemetery. Tommy was born to Tom and Mary Merritt in Houston, TX, on November 15, 1944. In 1951, they moved to Roswell, NM, in hopes of improving Mary’s health. Tommy was a hard worker; from the time he could ride a bike, he had a paper route in North Roswell. He went to work for Piggly Wiggly on Hobbs Street at the age of 15. It was there that Tommy met and fell in love with Marjorie Russell, they were married in 1964. He served in the United States Army at Ft. Benjamin Harrison but returned to Roswell, the work, and the people he loved. He was promoted to assist Manager in Clovis, NM, and later to store manager in Muleshoe, TX. In 1978, Tommy was offered the opportunity to buy into his first Sonic Drive-In. He knew nothing about fast food, but after many prayers and thought, he used the girl’s college funds and, with the local banker’s reluctant backing, to buy into his first store. A short time later, Tommy was offered the opportunity to buy another and another, beginning a career that lasted for the next forty-five years. He was a hard-working businessman with a quick wit and a dry sense of humor. Tommy loved business, but most of all, he loved people. He loved his family and managed a little time off to attend the kids sporting events as well as an occasional pro game. Tommy liked to play golf, although he was never very good. He loved to travel and felt privileged to visit many places around the world. Tommy loved all animals. Recently, he was in the process of spoiling Charly, Mollie, Gracie, and Cloie. Tommy will be greatly missed by friends and family. Those left to cherish Tommy’s memory are his loving wife, Marjorie (Russell) Merritt; children: Thomas J Merritt III, Heather (Merritt) Gill and Kevin of Mesa AZ, Patsy (Merritt) Garcia and Diana of Roswell; grandchildren: M.T. Bryce Silva of Roswell NM, Austin T. Garcia Merritt of Albuquerque NM; siblings: Bobby J. Merritt and Betty of Las Cruces NM, James D. Merritt and Carole of Las Cruces NM. Tommy is preceded in death by his parents: Thomas J Merritt and Mary E. Banister. Those blessed to serve as Honorary Pallbearers are Diana Garcia, Sterling Woolridge, Kevin Gill, Bill Herring, Martin Romero, J.P. Jones, Bill Herring, and Stephen Herring. Those honored to serve as Pallbearers are M.T. Bryce Silva, Michael Silva, Jim Howard, Mike Silva, Rick Mullins, and Jeramiah Jackson. The family would like to extend a special “Thank You” to the Dr’s and nurses at Eastern New Mexico Center for the many kindnesses that were extended to us these past few weeks. In lieu of flowers, donations can be made in honor of Tommy to the American Heart Association. Tommy’s tribute was written in his honor by his family.

The family of Thomas J. Merritt Jr. created this Life Tributes page to make it easy to share your memories.

Send flowers to the Merritt family.