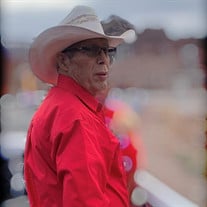 Thomas “Tommy” Mireles, 64, passed away on Tuesday, December 7, 2021. He was the 5th child born to Eloy and Eliser Mireles on July 27, 1957. He attended high school in Dexter, NM where he met the love of his life Graciela Gutierrez. After attending NMSU for 1 year, he decided that he couldn’t be without his love and married her on November 12, 1977. From their love they welcomed 2 sons, Matthew and Bryan. Tommy was a man of the community taking care of old and young alike. He wore many hats, from Volunteer Firefighter to the most recent Town Councilman. Tommy worked at Frazier Oil for 45 years. Dedicated to his work, he was always ready and willing to help anyone out. Everyone had his number, it didn’t matter the time of day, if someone needed help or had something that needed to be fixed, he would be there in a flash. He was helping however he could. You always knew where he was at because you could spot that white work truck everywhere. Although Tommy could be seen helping with youth football, basketball, and even soccer, his favorite pastime was volunteering for Dexter Little League. He started as a coach and became President of the league, from running the concession to maintaining the fields, you knew he would be there. After he handed over the reins to the kids who grew up to be adults and took over, you would still find him at the fields, especially after severe weather, cleaning and drying the fields, so the players wouldn’t have to miss out on their games. Again, spotted out behind the outfields in his white work truck, kids, even to this day would tell you they knew they had at least one fan out there cheering them on. He was a volunteer firefighter for 43 years. During which time he wore the hat of Fire Chief for 2 years. His biggest achievement of firefighting was in 2019 when he was honored as Hero of the Year from Dexter Fire and Rescue. Family was important to Tommy, it didn’t matter the distance his siblings moved he always made time to go see them. From San Antonio, Arlington, and Odessa, Texas to Rio Rancho and Santa Rosa, NM, he would travel. Not only was he involved in all things that his sons would participate in, but he was also an active cheerleader and coach for his nephews and nieces. The tradition only carried on as his grandsons and great nephews and nieces became active in sports and school. The loss of Tommy will be felt by not only his family and friends, but by so many others who had the privilege to meet and know him. Whether you met him because he was doing his job, or you met him because of one of his many volunteer hats, or simply because you crossed his path, he was one person who always made a lasting impression. Tommy is proceeded in death by his parents, Eloy and Eliser Mireles, father and mother-in-law Roberto and Aurora Gutierrez, sister and brother-in-law Juanita and Elias Natividad, brother and sister-in-law, Eddy and Jesse Mireles; brother-in-law Rance Parks; and nephews Jimmy Natividad, Christopher Mireles, and Angel Mireles. Tommy is survived by his loving wife Gracie, 2 sons, Matthew and Bryan, and 4 grandsons, Jacen, Izais, Xavier, and Easton; brothers, Gilbert and wife Renee Mireles of San Antonio, Tx; Eloy, JR and wife Jeannie Mireles of Rio Rancho, NM; Abel and wife Margarita Mireles of Roswell, NM; and sisters Dilly and husband Lawrence Brady of Dexter, NM; and Ruby Parks of Roswell, NM; Goddaughters Amanda Regalado and Deidre Mireles; along with many nieces and nephews. Services will be on Friday December 10, 2021 at 2pm at Anderson Bethany Chapel.

The family of Thomas "Tommy" Mireles created this Life Tributes page to make it easy to share your memories.

Send flowers to the Mireles family.