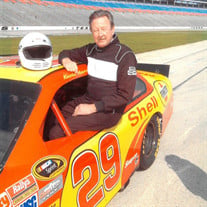 Victor Lee Hamill, 75, passed away on Monday, May 23, 2022, at home with his family in Roswell, NM, after a long battle with cancer. Please take a moment and share a kind thought or memory with Vic’s family at www.andersonbethany.com. Cremation has taken place, there will be no visitation. A Memorial service will be held at Anderson Bethany Funeral Home, 2609 South Main Roswell, NM 88203, on Friday, June 17, 2022, at 10:00 AM. Vic was born the first child of Drew and Dorothy Hamill in Roswell, NM, on September 25, 1946. He was a graduate of Roswell High School and Abilene Christian University. Just before Vic graduated from ACU, he joined the New Mexico Army National Guard Reserves. After graduating from ACU, Vic was transferred to Fort Huachuca in Arizona, where he completed his formal training. After completing training in Arizona. He moved to Dallas, Texas, where Vic transferred to Air Force Reserve. He worked for LTV, where they built aircrafts, and then became a State Farm Insurance agent. Vic decided to move back to New Mexico, where he built and sold homes in Ruidoso. While in Ruidoso, Vic met his wife, Donna Hamill. After marrying Donna, Vic took a job as a pipeline inspector for Willam Brothers in the state of Oklahoma. After the pipeline work was complete, Vic and Donna moved back to Ruidoso, NM, where their son Christopher Lee Hamill was born on November 6, 1983. In 1984, Vic’s father, Drew Hamill, asked for Vic to return to Roswell to help with the current family school bus business. Vic managed Hamill Transportation until he retired in 2009. During Vic’s management at Hamill Transportation, he became very involved with the Roswell Independent School District (RISD) handicap skiing program. In retirement, Vic enjoyed traveling with family and friends. Vic took many motorcycle trips with his friends from Washington State to Florida and beyond. Vic also loved getting together with his friends to play golf as much as possible. He is preceded in death by his parents: Drew and Dorothy Hamill Survivors include Vic’s wife, Donna Hamill of Roswell, NM: son, Chris Hamill and wife Liz Hamill of Carlsbad, NM; brother, Steve Hamill and wife Jean Hamill of Hagerman, NM; and sister Melanie Hamill of Roswell, NM; grandchildren: Parker, Kendall, and Claire Hamill; as well as numerous nieces and nephews. In lieu of flowers, the family asks that memorial contributions may be made to Harvest Ministries 601 N. Main Roswell, NM 88201, Roswell Humane Society 703 E. McGaffey Roswell, NM 88203, and Ski Apache Adaptive Sports P.O. Box 2138 Ruidoso, NM 88355. Vic’s tribute was written in his honor by his family.

Victor Lee Hamill, 75, passed away on Monday, May 23, 2022, at home with his family in Roswell, NM, after a long battle with cancer. Please take a moment and share a kind thought or memory with Vic&#8217;s family at www.andersonbethany.com. Cremation... View Obituary & Service Information

The family of Victor Lee Hamill created this Life Tributes page to make it easy to share your memories.

Send flowers to the Hamill family.