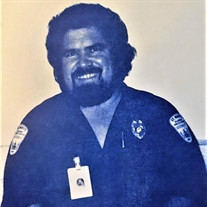 Walter Scott Sutherland, 68, passed away on Thursday, May 6, 2021, in Roswell, NM. Please take a moment and share a fond memory or kind expression of sympathy for Scott’s family at www.andersonbethany.com. SERVICES: There will be a Rosary for Scott at Anderson Bethany Funeral Home on Friday, May 21, 2021, at 9:30 AM, followed by a Celebration of Life at 10:00 AM. Interment will follow at South Park Cemetery. On June 16, 1952, Scott was born to Walter Scott Sutherland Sr. and Norberta “Novie” Sutherland in Roswell, New Mexico. He graduated from Dexter High School and then enlisted in the Marine Corps. During the Vietnam War overseas, Scott did a tour and was also a Prisoner of War for a short time. Although he never spoke much about his time in Vietnam, he was proud to be a veteran of that era. During his time of service, Scott achieved numerous awards and medals from the US Marine Corps. Later, he met and married the love of his life, Tammy Peralta Sutherland, who preceded him in death. Scott worked as a Security Guard for a Medical Center. He loved spending time with his family and playing slots at the casino, deer hunting, and fishing. Scott’s favorite football team was the Dallas Cowboys. His memory will live on forever and will be missed by his family and friends. SURVIVORS: Those left to cherish Scott’s memory are his children: David Sutherland and wife Priscilla, Samuel Peralta and wife Casey, Marcelino “Macho” Peralta and wife Katherine, Jonathan Sutherland and wife Tiffany, Alyisa Sutherland, Desiree Sutherland, Alize Sutherland and Brianna Servantez; grandchildren: Adrianna Peralta, Savannah Peralta, Lukas Peralta, Ava Peralta, Ella Peralta, Charlie Peralta, Bonnie Peralta, David Sutherland Jr, Carlos Vega, Noah Cobos, Nicole Sutherland, Xavier Sutherland, Jonathan Sutherland Jr, Robbie Adams, Justin Jones, Nicole Sutherland Moisa, Jazmine Cole, and Nicholous Charley; great-grandchildren: Justice Sutherland, Jazmine Garcia, Charlie Dutchover and Justin Jones Jr; siblings: Prescilla “Sheila” Vargas, Daniel “Dario” Sutherland and Ivan “Walter” Sutherland; Tia, Anna Mae Mendoza; Tio’s: George Gallegos and Refugio “Cuco” Gallegos; numerous nieces and nephews; as well as his close friends: Juan Saenz, Julia Chavez, Chris Casey, Ruth Horace and Ted Gonzalez. PRECEDED: Walter is preceded in death by his wife, Tammy Peralta Sutherland; son, Lucas Peralta; parents, Walter Scott Sutherland Sr. and Norberta “Novie” Sutherland; paternal grandparents: Harry Sutherland & Pilar Gallegos; maternal grandparents: Mike Villescas & Liana Lucero; sisters: Adeline Sutherland and Pearl “Cookie” Soto; and her brother, John Sutherland. The family would like to give a special “Thank You” to Walter’s daughters that took care of him and stayed by his side, his daughters-in-law, Katherine Peralta, and Prescilla Sutherland for always being there when needed, as well as the Artesia VA Clinic and Interim Health Care. In lieu of flowers, contributions can be made to the Wounded Warrior Project. To My Dad For all the times you supported me with strength and love Thank You For all the times I forgot to say it. I Love You!

Walter Scott Sutherland, 68, passed away on Thursday, May 6, 2021, in Roswell, NM. Please take a moment and share a fond memory or kind expression of sympathy for Scott&#8217;s family at www.andersonbethany.com. SERVICES: There will be a... View Obituary & Service Information

The family of Walter Scott Sutherland created this Life Tributes page to make it easy to share your memories.

Send flowers to the Sutherland family.