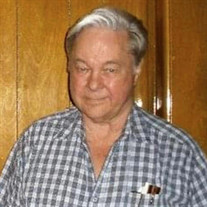 Weldon R Steen passed peacefully in his home on February 4, 2022 after a short illness. There are no services planned at this time; there will be a Memorial later in the Spring when weather and health permit safe gatherings. Weldon was born in Crosby County, Texas on May 16, 1937, to Walter Paris (Johnny) and Luella Lindsay Steen. He married Janice Paulk on June 21, 1958, in Levelland, Texas; they spent the next three decades raising six children, and the last three decades resting. At the time of their marriage, Weldon worked in road construction, so they moved frequently, living in 31 small Texas towns over the next six years. In 1964 Weldon went to work for Wacker’s Five and Dime store in Brownfield, Texas; in 1967 he was promoted to Manager of a store in Hobbs, New Mexico where the family lived until 1982. In 1970, Weldon became an Air Traffic Controller at the Hobbs Airport, where he remained (minus a brief transfer to Lubbock, Texas) until he was transferred to the Roswell Airport late in 1981. Weldon retired from Air Traffic Control in 1990 and spent several years working part-time at the Roswell Racquet Club. Weldon had a deep and unwavering belief in God and spent his life as a devoted servant to Christ. In Hobbs, he and his family were very active members of the Northside Baptist Church where he was instrumental in beginning a bus ministry and Children’s Church, bringing many children to church each week, and teaching them about God’s love. After moving to Roswell, Weldon was active at Grace Community Church, where he leaves many friends. In the early years of the church, he worked tirelessly to obtain and distribute audio recordings of the services; and was always available to help where needed. Weldon was, above all else, a servant of God and a family man. He was also a loyal friend, a lover of music and science fiction books, a gardener, an avid photographer, and a man who could do what needed to be done. He could fix the car, remodel the house, install a Franklin stove, make an awesome Tortilla Soup, bake a Rum Cake, grow a rose garden, and laugh and play with his grandchildren and great-grandchildren. He was preceded in death by his parents, Johnny and Lue Steen, and his sister Johnny Lou Horton. He is survived by his loving wife, Janice, and their six children, 18 grandchildren, 24 great-grandchildren, and one great-great-grandchild. He will be remembered with laughter, tears, and love by his family: Donna Steen Brown and husband Mel, Sharon Steen, Laura Steen Edwards and husband Wendel, Kathy Steen, James Steen, Bill Steen; Jami and Namon Shipley, Kristen and Dathan Benton, Melissa and Craig Barker, Amanda Goodheart, Jesse and Cameall Goodheart, J’Nee Steen, Alexandra Ornelas, Javier Ornelas, Natalie Cabrera, Jessica and Aaron Bartz, Stephanie and Stuart Wilson, Jacob and Windy Perry, Cade and Bethany Clayton, Carson Clayton, Shelby Noles, Nik Steen; Jonathan Gautney, Aubrey Shipley, Charlotte, Dathan, Jr., and Calliope Benton, Wyatt Hawkins, Conrad Barker, Mia Goodheart, Ever Pittman, Aaron Guevara, Tegan and Liam Goodheart, Aria and Adalynn Guevara, Jesse Marr, Cecilia Ornelas, Abel Garcia, Caitlyn and Christopher Sanchez, Dannie, Aiken, and Preslie Perry, Graham Clayton, and June Noles. Please take a moment and share a kind thought or memory with Weldon’s family at www.andersonbethany.com. Weldon’s tribute was written in his honor by his family.

Weldon R Steen passed peacefully in his home on February 4, 2022 after a short illness. There are no services planned at this time; there will be a Memorial later in the Spring when weather and health permit safe gatherings. Weldon was born... View Obituary & Service Information

The family of Weldon R. Steen created this Life Tributes page to make it easy to share your memories.

Weldon R Steen passed peacefully in his home on February 4, 2022...

Send flowers to the Steen family.