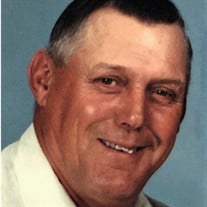 William “Bill” Shelby Bass passed away peacefully on Monday, August 16, 2021 at the age of 86, at his home in Roswell, New Mexico, surrounded by his family, after a long heroic battle with Alzheimer’s. Services will be held on Friday, August 27, 2021, at 2:00 PM, at Anderson Bethany Funeral Home. Pastor Tim Arlet will be officiating the services. Arrangements have been entrusted to Anderson Bethany Funeral Home and Crematory in Roswell, New Mexico. Honorary pallbearers will be his son in laws Charles Harrell, Clay Rains, and Mike Ivie, and all of his grandsons. Bill was born on September 3, 1934, in Prentiss, Mississippi to the parents of Roe Bass and Ottie Lee Sumrall Ervin. He spent his early years in Hattiesburg, Mississippi, and moved to Portales, New Mexico when he was a teenager. In 1953 he entered the United States Marine Corp and served three years. He served as an airplane mechanic during his service. After the service he began his civilian life in the trucking industry. This career gave him the opportunity to own and operate his own trucking business, and he never met a stranger that he didn’t become friends with. Bill married Molly Moorhead of Roswell in 1969. Bill and Molly raised racehorses and won numerous Derby and Stake events. As a young man he prayed that he would be surrounded by women. To show him that God had a sense of humor, He answered his prayer by blessing him with six daughters: Bonnie Cuttrell of Hobbs, NM, Kathy Wilson of Roswell, NM, Karen (Charles) Harrell and Janet (Clay) Rains both of Clovis, NM, Cindy (Mike) Ivie of Artesia, NM, and Twila Butler of Rogers, AR. He was also blessed with two sons: Shelby Bass of Houston, TX and David Bass of Roswell, NM. Bill is preceded in death by his parents, stepfather LK Ervin, brothers Charles Bass and Rick Ervin, a sister Edith Pratt, his son-in-law Gene Cutrell, and a grandson Matthew Rains. He is survived by his loving wife, Molly, of the home, his six daughters, his two sons, a brother, Keith Ervin of Albuquerque, NM, his stepbrother Kenneth Ervin of Johnson City, TN, by 20 grandchildren, 29 great grandchildren, and 3 great-great grandchildren. He is also survived by a host of numerous nieces and nephews. The family would like to thank Kindred Hospice (excluding the Hospice physician), Maureen, and the VA for making it possible to continue Bill’s care at home. A special thank you to Pastor Tim Arlet for his time, his comforting words, and the beautiful music he played. In lieu of flowers, the family has set up a Go Fund Me page to establish a scholarship fund in his name. The information needed for donations is https://gofund.me/f16711e4. Please take a moment and share a kind thought or memory with William’s family at www.andersonbethany.com. William’s tribute was written in his honor by his family.

William &#8220;Bill&#8221; Shelby Bass passed away peacefully on Monday, August 16, 2021 at the age of 86, at his home in Roswell, New Mexico, surrounded by his family, after a long heroic battle with Alzheimer&#8217;s. Services will be held... View Obituary & Service Information

The family of William "Bill" Shelby Bass created this Life Tributes page to make it easy to share your memories.

Send flowers to the Bass family.