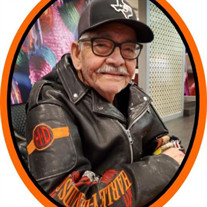 Leno Remembered Yrenio (Leno) Carrera was called to Heaven while surrounded by his children on February 19, 2022, in Ft. Worth, TX, at the age of 89. He was born in Presidio, TX, in 1932. However, Artesia, NM, was his home as of 1945. Despite his medical conditions in recent years, his determination, courage, and faith stayed strong. He was raised by his Grandma and enjoyed riding his horse and raising chickens. Leno learned at an early age to work hard and care for others. Leno was married for 40 years to the love of his life, Esther Hernandez. He was a devoted husband and loving father to their children: Lucy Ann and Yrenio. He was a natural mechanic and loved cars and motorcycles. In Leno’s younger years, he enjoyed working on cars in order to make them go faster for him to speed race. He also enjoyed riding his Harley and enjoying nature. Of course, no matter what Leno was driving, it had to be spotless at all times! Leno took great pride in his work, whether as a farmer planting and harvesting crops or a heavy equipment operator. He understood the lay of the land and had a unique skill of being able to level the land without any measuring tools. Leno enjoyed the comradery of exchanging stories with his co-workers and the pride of accomplishing new projects. Leno will be remembered for his pride, pure unconditional love for people, and overall being an honest God-fearing man. He never met a stranger or turned away anyone who needed help, even if it meant he had to make sacrifices. Leno didn’t need much to make his life complete. Anything you gave him would make him happy. The price, size, or gift didn’t matter to him, it was the fact that you cared enough to give. He enjoyed western movies and could be found singing to himself, My Darling Clementine, on rare occasions. Preceding Leno in death are his wife, Esther Carrera; grandson, Matthew Rangel; and parents: Jose and Luciana Carrera. Leno is survived by his two children: Lucy Ann Rangel (husband Domingo) and Yrenio Carrera (wife Belinda); grandchildren: Domingo Rangel, Yrenio III, Dustin, Brandon and Brittany Carrera; as well as great-grandchildren: Aaron Rangel, Nehemiah Aranda and Ariyah Carrera. Please take a moment and share a kind thought or memory with Yrenio’s family at andersonbethany.com. Yrenio’s tribute was written in his honor by his family.

Leno Remembered Yrenio (Leno) Carrera was called to Heaven while surrounded by his children on February 19, 2022, in Ft. Worth, TX, at the age of 89. He was born in Presidio, TX, in 1932. However, Artesia, NM, was his home as of 1945. Despite... View Obituary & Service Information

The family of Yrenio (Leno) Carrera created this Life Tributes page to make it easy to share your memories.

Leno Remembered
Yrenio (Leno) Carrera was called to Heaven while...

Send flowers to the Carrera family.